Academic Excellence Pays off at GCC 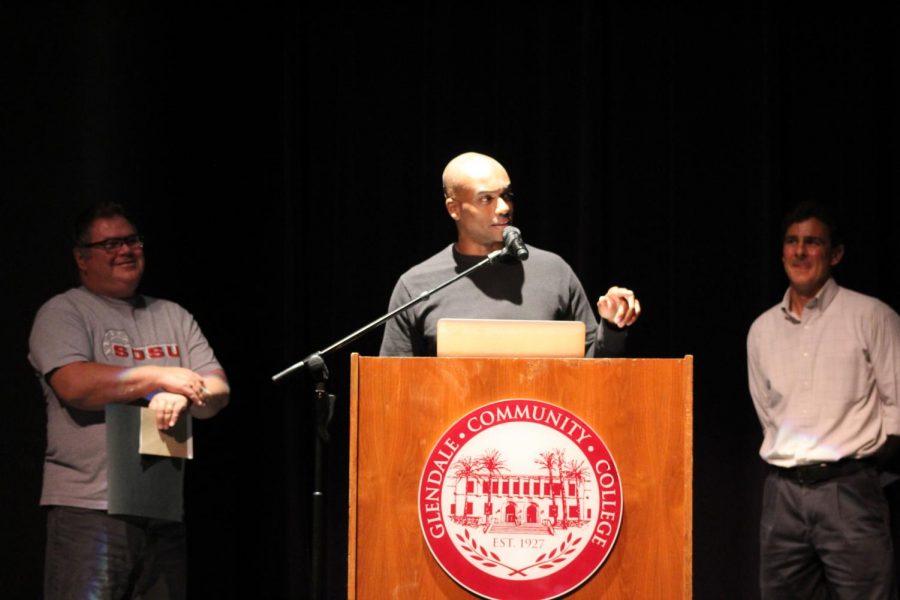 Four lucky and hard-working Glendale Community College students earned themselves scholarship awards during the Academic Senate meeting on Tuesday, May 8.

The scholarships were handed out for academic excellence and personal achievement, with each student having heart-warming background stories, which included a first-ever accomplishment by a GCC student.

Kasan Butcher, a 45-year-old nursing major, took home the Jeanne Cunningham Homemaker Academic scholarship – the first time it had been given to a father.

“We are really excited for this decision,” said political science professor Cameron Hastings. “And all the faculty that we have spoken with that have had him feel kind of equally excited about this and that it’s a good decision.”

Butcher is a single father and re-entry student who has managed to maintain a 3.94 GPA going through the rigors of the GCC nursing program, all while taking care of two daughters.

“You can tell he’s doing an amazing job,” said biology professor Joseph Beeman. “This young man is going to go very far in medicine and do very great things. [He] has huge vision on where he wants to go, his goals, and what he wants to do with his future and nothing is going to stop him.”

The Jeanne Cunningham scholarship is given to a transferring student who takes longer than four semesters to transfer because they are the primary caregiver for one or more dependent children.

Butcher took as many as six classes per semester at GCC and will be transferring to Cal State Los Angeles later this year. “Being in a class with 18- and 19-year-olds,” said Butcher, “sometimes it’s torture.”

The Outstanding Career Education scholarship was awarded to architecture major Talar Manuail. She was described as hardworking, professional, modest, and humble by adjunct professor of architecture, Izabela Boyajyan. Professors have had nothing but good things to say about Manuail, according to Boyajyan.

Manuail is currently working on her advanced design project for architecture.

Selena Miranda was the recipient of the Two-Year Academic Excellence scholarship. “She stood out tremendously,” said counselor and assistant professor James Castel de Oro. “She showed her leadership, her participation, and she knew what she wanted to do.”

The Four-Year Academic Excellence award was given to Stacey Yang, who is a biology major and will be going into medicine. She was described as organized and focused by professors and counselors who knew her well.

“Her presence in the lab changed the whole attitude and atmosphere of everybody in that lab,” said professor Beeman. “She’s super positive, really excited about learning everything that she can. Highly intelligent, and it just brought everybody together.”