Thousands of Armenians March for Justice 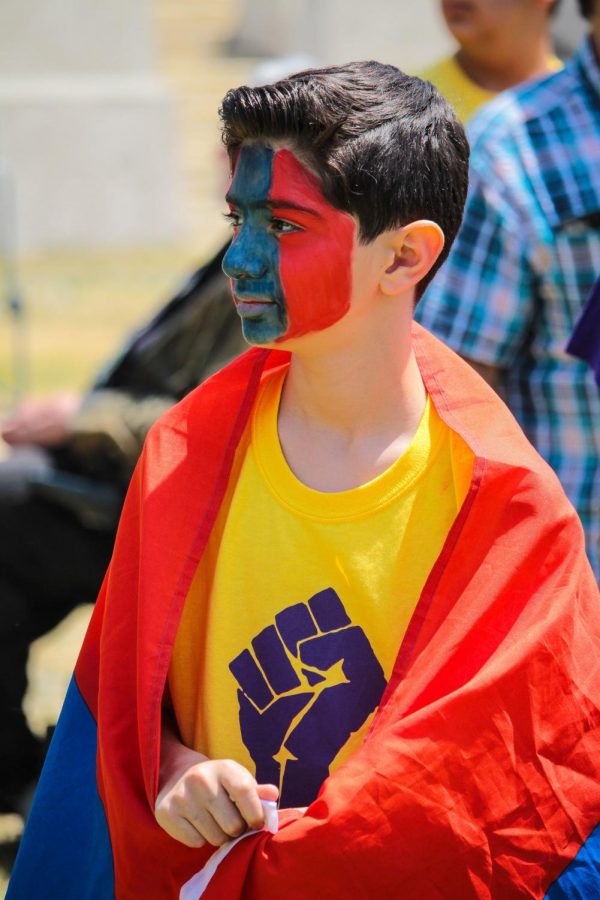 David Serobyan, 13-years-old, looks toward the crowd of protesters at the 103rd anniversary of the Armenian genocide.

For the 103rd anniversary of the Armenian genocide, thousands marched in the streets of Los Angeles on April 24 to demand official recognition by the United States and justice from Turkey.

Just one day before the commemoration, the people of Armenia overthrew their totalitarian Prime Minister Serzh Sargsyan following a 10-day peaceful protest.

The day of victory was followed by a day of remembrance that marks the darkest day in Armenian history.

He continued to talk about the Armenian genocide that took place in 1915, which was the cruel slaughter of Armenians by the Turks of the Ottoman Empire.

The next person to take the stage was Marc Toureille, also known as Marc 2Ray. He performed “1915,” a song he wrote addressing the Turkish government’s 103-year long denial campaign to cover a crime against humanity.

He initially wrote the song to be used as a tool for educational purposes. Since then, it’s been used in multiple high school and college curricula to teach the next generation about this important part of history.

He has also performed it at the White House Vigil in both 2016 and 2018, as well as at the Times Square commemoration in 2017, but said it felt amazing to perform at the March for Justice in front of the biggest population of Armenians outside Armenia itself.

Toureille was honored to perform and said it was a great experience that he will never forget. “I’m humbled by the amount of support my song received.”

As thousands of people left the park for a 1.5 mile march to the Turkish Consulate, loud chants echoed throughout the streets. “What do we want? Justice! When do we want it? Now!”

Raya Saffold and her two children, Myla and Sevan, are all descendants of survivors of the Armenian genocide. The family flew in all the way from Phoenix on the morning of the rally. “We’re here to support,” said Saffold.

The yearly march is important for the Armenian community, especially since Los Angeles has about 200,000 people of Armenian descent.

The focus lies on spreading awareness to receive recognition at some point in the near future.

Not only has the United States not yet recognized the Armenian genocide, but Turkey still argues that it never happened.

David Serobyan, 13, was one of the many young people in the crowd. He said that he came to the rally with his family to recognize the genocide. “It happened during 1915,” Serobyan said.

With his face painted in the colors of the Armenian flag – red, blue, and orange, he stood out in the big masses. “I don’t think many people would’ve done it. It’s just unique.”

He spoke to El Vaquero and other media, including the Los Angeles Times, which featured him in their coverage of the event.

Decades of painful history and stories of survival united Armenians and supporters in the streets of Los Angeles to make sure that history never repeats itself, and that the story lives on despite denial.