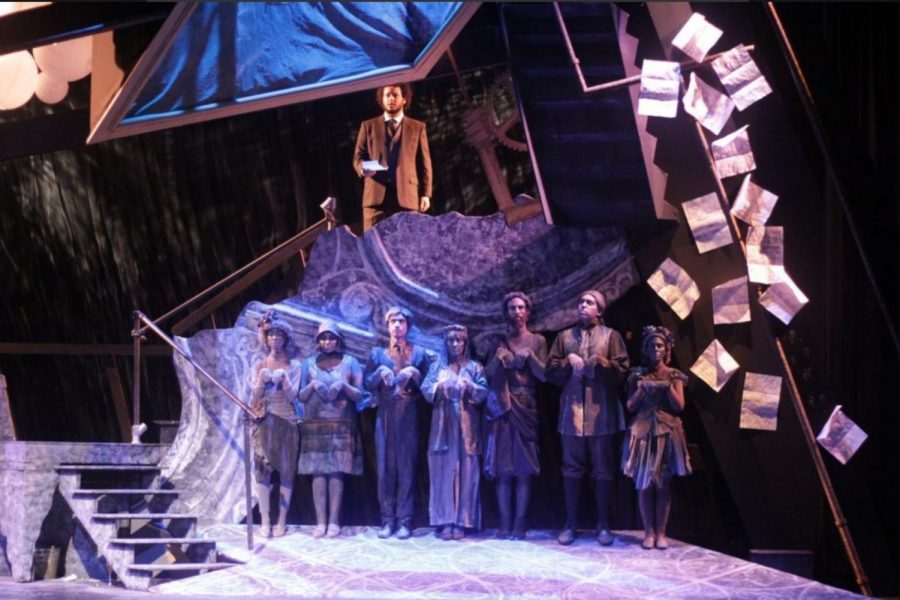 Orphuse, Hayden Busby, reads a letter he wrote to his dead wife, Eurydice, and is joined by all the stones.

Hundreds attended the Glendale Community College Theater Arts Department production of “Eurydice,” based on Greek Mythology. Eurydice played by Gassia Herbian, is set to marry Orpheus, Hayden Busby. But on the day of her wedding, she falls to her death, a heartbroken Orpheus journeys to the Underworld to get his wife back.

The time period was changed from ancient Greece to 1950’s London.

As the curtains went up on the charmingly decorative GCC stage, the Stones voiced by various actors, placed on the corners of the stage set still. Herobian and Busby stepped on to center stage with the sound of birds, sand and waves of water greeting their arrival. The romance was in the air but not between the two lovers, which was closer to a casual friendship or a brother and sister relationship.

Although the romance was lackluster, the relationship between Eurydice and her late father, Manny Armas Noriega, was much more convincing. Noriega’s performances was spectacular beginning to end. The frustration trying to communicate with his daughter to the grief they both feel by the end of the play. Noriega channeled his life experience into the roll of the father, he said.

Kevin Quijano stole the show with his performance as the Lord of the Underworld. He brought great manice and laughter while staying convincing as a being of great power and authority. It’s hard to believe that this was his first time in a production. Quijano added a Spanish flavor to his character has he went in and out of speaking in English and Spanish.

A lot of the exposition came from the stones who also doubled as the comic relief. Any laughs from the audience were almost always a relost of their delivery. Anyela Damas, Nikko Haller, Katerina Khramova, Melanie Ochoa, Robert Romero, Harrison Smythe and Tess Theophilus did a specalural job playing the living statues. Weather they had to stand still or change into things like a fountain or the three-headed dog, Cerberus, the stones pulled it off fantastically.

Melissa Randel, director, is proud of her faculty and students. “They are dedicated to try new and weird stuff and are also able to take it and make it their own,” she added.

The set was built by Guido Girardi, the production manager, and the students in theater arts design classes. The stage had an incredible three dimensional look to it while keeping a abstract style. It was almost like a pop up book coming out towards the audience.

Arnold Bueso, a new addition the theater arts department faculty, was the Set, Lighting and Projections designer on Eurydice. Bueseo came to GCC after working in Broadway in New York. He had a dream in working in all the entertainment capitals of the world, New York, Calif and Chicago. Now that he’s in LA his dream has come true Bueso and his 171 and 180 students lighted up the stage and shifted the mood with projections or color palette changes.

Eurydice is a tragedy done well. The production ran from April 5th to April 14th, for those who missed out you can catch these performers in the upcoming production of Marco Millions at Glendale Community College.