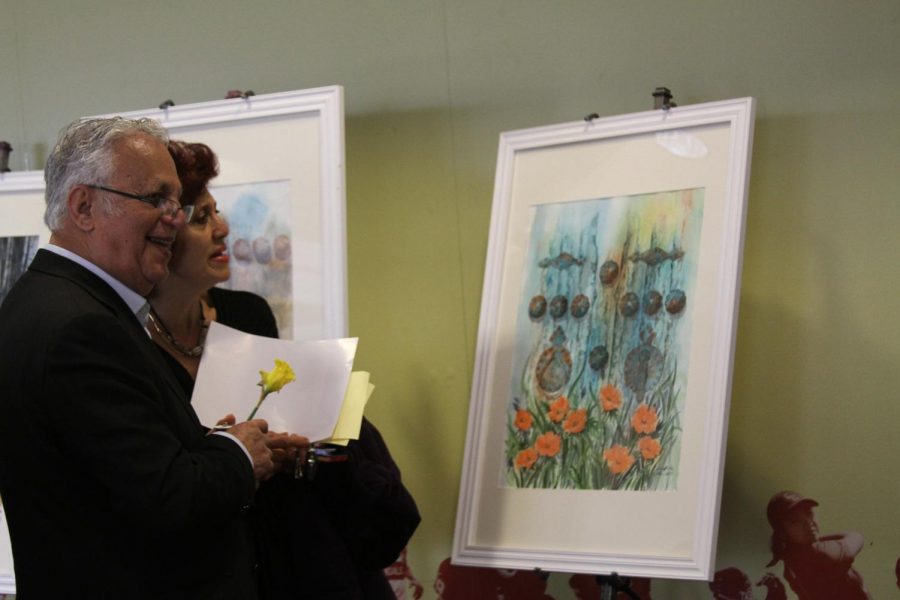 A couple appreciate Elahe Zare's are on display during GCC's Norooz celebration in the Student Center.

The Persian Students Association of GCC held its annual Norooz, or Persian New Year, celebration on March 20. This was the first time that the ceremony was held inside the Student Center, with the previous events being held at Plaza Vaquero.

The attendees were greeted with hot Persian style tea, sweets, and pastries as they took their seats. Every table was dressed with seven items which started with the letter ‘s.’  These can include anything from sugar to sarma. The mostly Persian and Armenian audience quickly made themselves feel like they were at home as the crowd was gathering.

The celebration started with Natalie Honarchian, the president of the Persian Club, giving a PowerPoint presentation. She went over the history and traditions of Norooz by even including the meaning of the word itself. “Nor” means new and “ooz” comes from a word that means year, explained Honarchian.

The celebration is traditionally held during the spring equinox and every culture celebrates it a little differently. For example, certain nations have begun to include the Quran as part of the seven decorations on the table. “The celebration is not related to any religion,” said Sharis Davoodi, club advisor and student services technician. “Just the New Year most people celebrate, Norooz is not about religion but about the beginning of the spring equinox, which traditionally marks the start of the New Year in Persian culture.”

Once Honarchian’s PowerPoint presentation was over, Elahe Zare, the special guest, took the stage to read a poem. The audience had their spirits high and were engaging in personal conversations as Zare took the stage. Some in the audience expressed their dissatisfaction by politely asking the people who were making all the noise to be quiet. This had very little effect on the crowd. Zare finished reading the poem without flaw and thanked the crowd as the music and dancing portion of the event was beginning.

Zare had come as a special guest as a GCC student and a talented Persian-Armenian artist. She brought (number) of her paintings to the event. Her art pieces were displayed in their own section of the Student Center. They drew a lot of attention from the attendees as they came in and some even asked Zare to take a picture with them.

“I would like to thank all faculty classified staff who helped us promote this event to our students,” said Davoodi. “It’s moments like that, that as an advisor, I feel like the club established their mission to unite all cultures together.”

There will be another event in April held by the Persian Student Association of GCC, where they will be selling Persian ice cream. This will be a chance for the community to experience something other than the usual kabobs, Davoodi explained.

For those who it may want to join this club, the Persian Student Association meets every other Thursday at noon in the Career Center on the third floor of the new Sierra Vista Building.