L.A. Unites in March for Our Lives 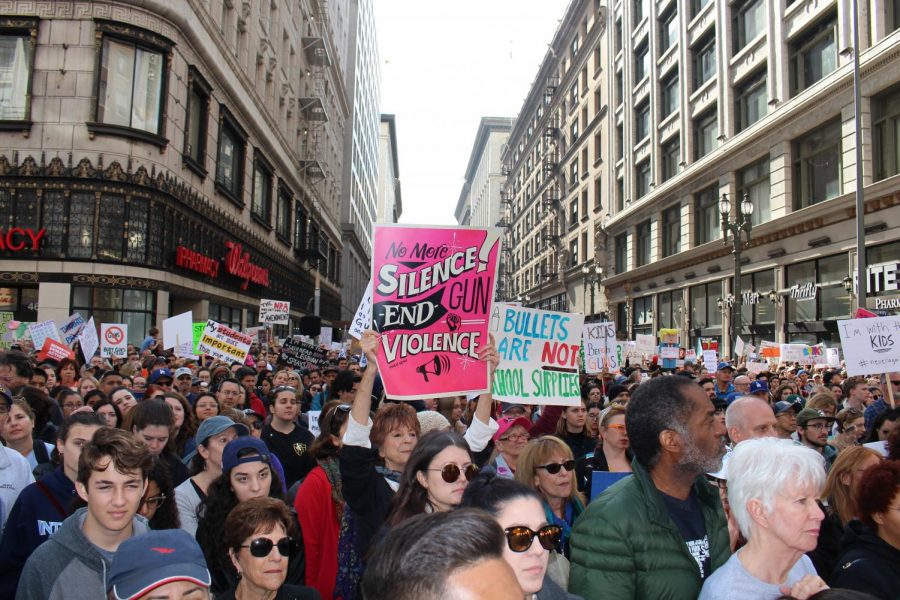 In the aftermath of the Parkland, Fla., mass shooting, over one million people across the country came together the morning of March 24 in hopes of putting an end to one of the biggest public health crises in the United States – gun violence.

Loud chants by thousands of determined students and supporters echoed throughout the streets as they marched their way towards Los Angeles City Hall. “What do we want? Gun control! When do we want it? Now!”

Los Angeles Mayor Eric Garcetti welcomed the large crowd outside City Hall, saying it was a “historic day” led by the youth of the country. Before leaving the stage, Garcetti asserted the strength of California’s gun legislation, and ended with a clear message for President Donald Trump. “Get with the program, or get the hell out of the way.”

The following hours were carefully planned with many speakers from movements such as Black Lives Matter, and several students that have survived mass shootings. Artists and actresses including Rita Ora, Charlie Puth, Amy Schumer, and Olivia Wilde took the stage.

The crowd had a hard time holding back their tears as Puth sang his famous song, “See You Again.” Next up was Will Smith’s daughter, Willow Smith, who had a message for young people: “I’m just so proud to be here supporting the children who have put this all together, and have connected themselves through their passion and from their pain to make something like this happen,” said Smith. “That just fills me with hope, it fills me with happiness.”

A few students that survived the Parkland, Fla., school shooting were also there to share their stories, talking about how kids should be able to go to school and get an education and future, without having to wonder if they are ever going to see that future.

“Enough is enough. This should never ever happen again, we have sacrificed enough lives,” said one of the students. “This world needs to see a change, and that change needs to start today.”

Another survivor, Sabrina Youngerman, who experienced the deadliest mass shooting in U.S. history in Las Vegas, explained, “I couldn’t smile again for weeks, and I felt guilty for laughing when someone made a joke. I cried myself to sleep, and had nightmares so often that they became normal. This experience is something I would not wish anyone to have to go through, not even my worst enemy.”

Comedian and actress Amy Schumer had some powerful words for U.S. politicians who she said are currently “digging the graves” of the people they should protect. Throughout her speech, she encouraged them to “make a little less money and be able to look at yourself in the mirror with no blood on your hands.”

Fellow actress Olivia Wilde addressed the National Rifle Association as she spoke to the audience. “Today, we are witnessing the moment the NRA has long been afraid of. An entire generation has been galvanized by their collective rage, and they are ready not only to march, but to vote,” said Wilde. “These upcoming midterm elections are your chance to channel your rage into action. Apathy is no longer an option. Your elected officials work for you, do not let those who choose to accept money from the NRA profit from your hopelessness, or the blood of your peers. Instead, vote them out.”

Although officials expected around 60,000 people at the Los Angeles rally, and had a hefty amount of security on site, there was a sense of unity and love amongst people which made for a calm and peaceful protest with no arrests reported, according to the Los Angeles Police Department. After the event, LAPD tweeted a response to the what they characterized as a successful day, stating, “This truly is the city of angels.”