Walking Out in Solidarity 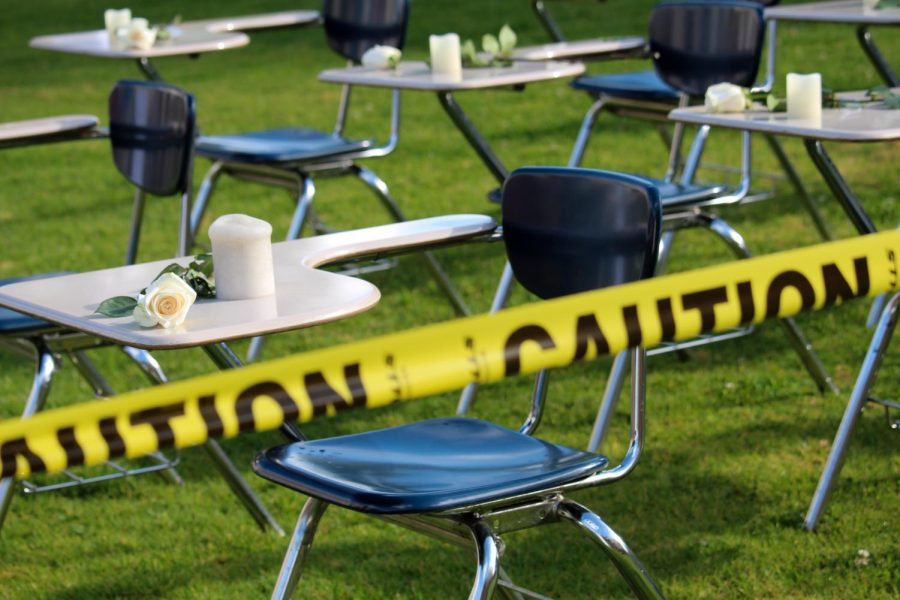 Organizers put out 17 desks to remember the students and faculty kills in the Parkland, Fla., shooting massacre.

Over 200 Glendale Community College students walked out of class on the morning of March 14 to protest gun violence and in memorial of the victims of the Parkland, Fla. mass shooting.

Students gathered in Plaza Vaquero around the 17 empty desks adorned with white roses, red poppies and candles and listened as the mic was opened up to anyone willing to share their thoughts and support.

The protest was a part of a much larger national movement that involved hundreds of schools across the country. Each movement had a planned walk out of class that would last for 17 minutes. One minute for each life lost at Marjory Stoneman Douglas high school exactly one month to the day.

The recent shooting has been the final straw for a lot of people. Students came together in unity across the nation to try and convince politicians to restrict the same type of firearm used in recent school shootings.

The walk out event on campus had several demands, including the banning of “assault-style” weapons and high-capacity magazines, the expansion of background checks to all gun sales, and government research into gun violence.

During the protest here at GCC both students and faculty came up to the microphone and shared their experiences and thoughts on the matter, including one very impassioned student.

“Their lives were unfortunately lost, but not in vain,” said Maria Alicia Sandoval, a sociology and political science major. “We will use the loss to make change. We can not have anymore blood spilled on the tables where our students are seated.”

Many students expressed similar sentiments of concern for their and others’ safety, as many have personal or second-hand experience with these tragedies.

“I don’t want to go to school everyday and have to look over my shoulder,” student Sean Barry said. “We shouldn’t have to live in fear.”

The protest did not go without other opinions being aired. One student walked by shouting, “Shall not be infringed, the Second Amendment, ladies and gentleman.” This came as an English professor was talking about how worried she was for her daughter’s safety, who is in elementary school.

Student Audrey Cardenas, who is both pro-gun and also pro-gun control, participated in the protest. “These kids are scared with no one to hold them and tell them it’s OK,” she said. “It’s sad.”

Cardenas is a proud gun owner, possessing both a handgun and a shotgun, but joined out of concern for her three-year-old daughter’s safety.

An estimated one million students came together across the nation to make their voices heard and demand change in a display of unity and outrage.

“We stand in unison with our fists up in the air to know and to tell all these children and to tell the politicians that we need change now,” said Sandoval. “We fight so that future generations don’t have to.”

Since the Feb. 14 shooting, no nation-wide gun control measures have been passed.

On March 7, Florida Gov. Rick Scott signed into law a bill that imposed additional firearm restrictions – the first instance of increased gun control measures in the Sunshine State in decades.

The $400 million gun control bill increased the minimum age to purchase any firearm from 18 to 21 years of age. It also imposed a three-day waiting period on gun purchases and banned “bump stocks,” a modification that allows a semi-automatic rifle to increase its rate of fire similar to that of an automatic weapon.

The legislation was passed despite stiff opposition by the National Rifle Association.

Other students, who opted not to speak at the open mic, rallied around in support of those who did. One student had a sign encouraging people to call their local representatives and demand change.

Sergio Domingues, who lead the protest here on campus, ended the protest with some powerful words. “This time it was 17, how many more?”

Prominent politicians took to Twitter to show support for the students participating in the walk out event.

“There is a powerful movement happening in this country, led by the courageous students of Stoneman Douglas High School, demanding action on gun violence,” California Sen. Kamala Harris tweeted. “Yet GOP leaders are refusing to give us a chance to vote or even debate legislation on this issue.”

“We’ve heard the students who participated in the National School Walkout loud and clear. I’ll never stop fighting for stronger laws,” California Sen. Dianne Feinstein tweeted. “As a country we can’t allow children being shot to death in school to become routine. We must break the cycle of discussion and turn to action.”

The protests were started by the March for Our Lives movement in Washington D.C., but students organized the protests themselves at their individual schools throughout the United States.

“March For Our Lives is created by, inspired by, and led by students across the country who will no longer risk their lives waiting for someone else to take action to stop the epidemic of mass school shootings that has become all too familiar,” reads the mission statement of the movement.

The shooting that started all of these rallies occurred Parkland Fla., on Feb. 14 at Marjory  Stoneman Douglas high school, where the 19-year-old perpetrator used a semi-automatic AR-15 to kill both students and teachers.

The shooter has been charged with 17 counts of murder and 17 counts of attempted murder. Florida prosecutors have stated that they will be seeking the death penalty.

Elena Jacobson can be reached at [email protected]