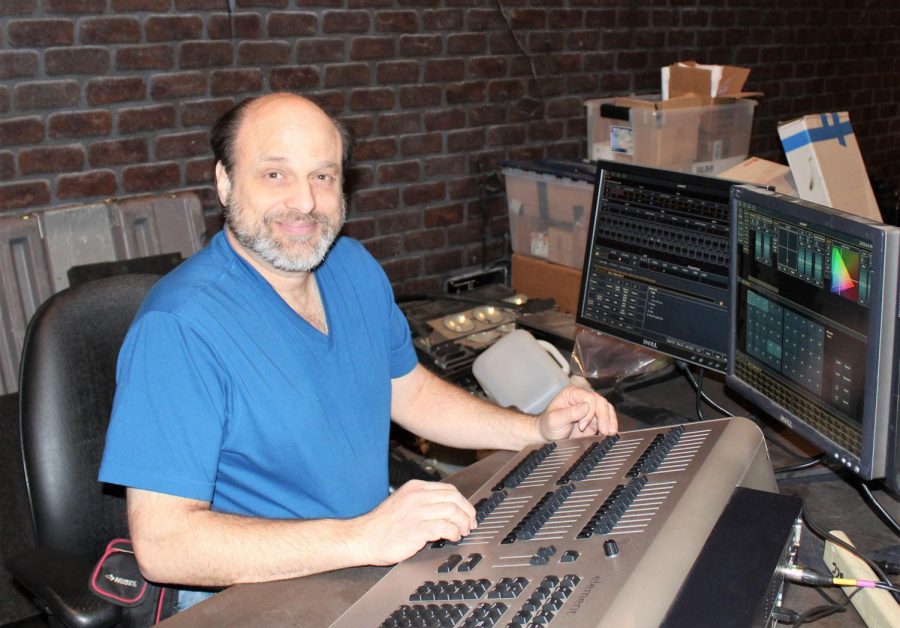 The architect wakes up and goes to work. His job is to create a world for others to live in. He lays the ground, the sky, and the walls. To make sure that everything is in shape he even gifts this world with light that he creates.

For the past 25 years Guido Girardi, the performing arts production manager at GCC, has been building the environment for college plays.

Due to downsizing in the early 90s at a freelancing company that he previously worked for, Girardi’s talent was brought to Glendale Community College. In ‘93, he enrolled in a Spanish 102 class taught by Lourdes Pérez. The class was held in the old CB building, which used to be where the water fountain is today. Lourdes recounted that he’d have trouble staying up in her class due to him staying up working on his theater productions. Her father worked in the same field as Girardi and this allowed him and Pérez to grow as friends and eventually he asked her out on a date.  In ‘96 they joined in holy matrimony onboard the Queen Mary. “Once we got married I was like why would I work anywhere else. Everything is (already) here,” recounted Girardi. Today, Lourdes Girardi works at GCC as the Chair of the Language Arts Division.

Girardi is in charge of the events that are held at the main theater stage, the smaller theater studio, and the dance studio in the Sierra Nevada building.

“I usually design something for the show. Weather it’s set building, lighting, or both,” Girardi said.

Girardi designed the set and the lighting for Glendale Community College’s production of Shakespeare’s “Twelfth Night.”

In ’98 Girardi worked on his proudest campus project, “Guys and Dolls.”

A lot of work went into designing the set for this musical. Girardi wanted to recreate the Ed Harper painting, Nighthawks, as if it were a book.  He wanted every scene change to look like a page from a book was being turned. To achieve this on time for the opening night, Girardi received aid from his friends at the East West Players theatre organization. This production marked the first time that the college produced a musical.

Every couple of years, apart from working on campus, Girardi puts on a show with the East West Players in Downtown LA.  East West Players was founded in 1965 and is the oldest and largest Asian American theater company. This company gets him working with professionals. This is a contrast to working with students, which in most cases, are beginning to learn their craft. The last show Girardi worked on with them was the 2014 production of Beijing Spring.

He did lighting design for this opera that’s based on the uprising in Tiananmen Square. At the time the play was running it was also the 25 year anniversary of the event and many attendees came from China to see it. Girardi’s contribution won him the Sage Award from the Arts In LA organization for his lighting design.

Girardi is very proud of his former students who’ve continued to work in the industry after graduating. One of his first students, Gilbert Bagramian, designs the lighting for all the major Persian and Armenian groups and well as some hip-hop artists. Girardi added that Bagramian opened his own company and that he’d moved forward and worked with the likes of Kanye West.

Some improvements that Girardi would like to make to the theater department include updated equipment. Twenty years ago they had state of the art tech, today they still have the tools they got in the ‘90s and early 2000s.

The equipment still works today but they cannot do what the newer models are can. Moving the location of the bathrooms to the main floor he’d like to make it easy for the people to find the restroom, Girardi said. One last change he’d like is to get new seats for the auditorium. “With theater, you do as much as you can with what you have and we’re very good at that,” Girardi said.

“Part of what a [set] designer tries to do is to get the audience to feel like their inside that environment so they kinda forget who they are and that they’re watching a show,” Girardi said. “Which is one of the great things about theater, versus a movie, is that it’s 4D. Everything is happening all the time all around you all.” This is particularly true for the plays in the smaller stage where the actors are usually next to the audience, he mentions.

In addition to his duties as production manager Girardi also teaches part time on campus.

Be sure to check the catalog. After all, it’s time for the curtain call.