‘Celling It’: When Hard Work Pays Off 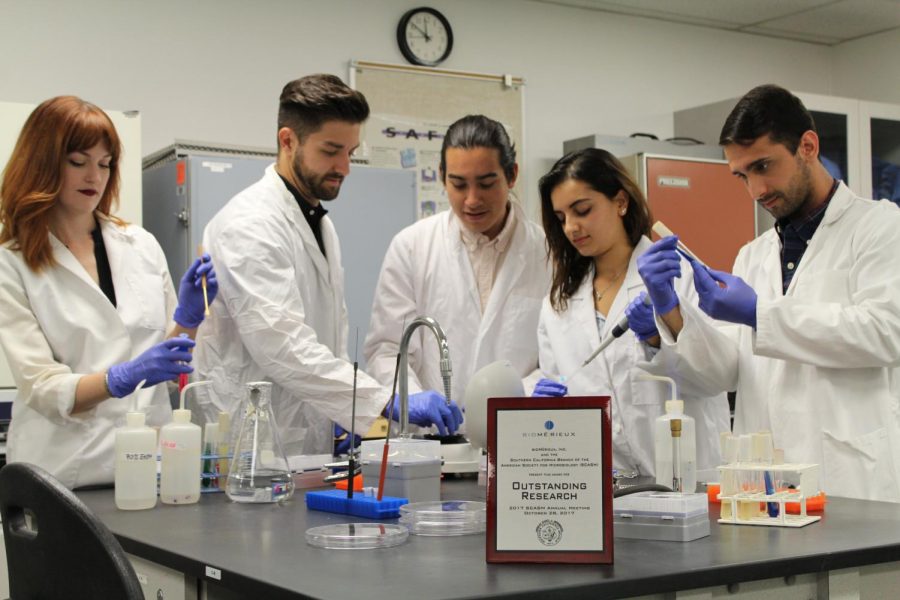 This past month, students from the Biology 298 class, instructed by Dr. Shelley Thai, participated in a conference known as the Southern California American Society for Microbiology, or SCASM.

His award not only landed him a sponsored trip to attend the National American Society for Microbiology next year, but also gave GCC the privilege of being represented at the National Conference for the first time ever.

Essentially, Fiterz studied a species of bacteria called Paraburkholderia unamae, which is incapable of causing disease and produces bioavailable nitrogen for plants such as coffee, sugarcane and corn. Nitrogen is a vital component of chlorophyll, and therefore photosynthesis.

Fiterz mutated, or changed, specific genes on the microorganisms, and observed the affected physical traits. The results were that there was a significant reduction in motility, which is the ability of the organism to move around. They also exhibited an overproduction of their outer sugar coating called exopolysaccharide (EPS). Their EPS allows them to attach to surfaces.

The poster is available to view in the “Biology Undergraduate Research Collaborative” display case located on the second floor of the San Gabriel building.

“Winning this award is a big deal for this college because we were the first community college in the history of SCASM to win the award for outstanding research at the undergraduate level,” said Fiterz.

SCASM is composed of clinical and medical microbiologists, as well as students from other universities with vastly superior resource pools. “We were small fish in a big pond in the presence of research-based universities like UCSD and many more, so it was a lot of pressure,” said Fiterz. “At the same time we wanted to have fun because it was our first time collectively at a real Bio conference.”

A student from a community college winning the award was no lucky mistake, though. Dr. Thai and her students had been hard at work together since this past summer.

Students also learn how to analyze and present scientific research articles in addition to conducting their own research projects. This special crop of students often went above and beyond what was required for the course. They would come in well before the start of class time, sometimes stayed hours after class had ended, and even gave up their weekends to conduct additional research.

Students then must make a scientific poster of their research project and defend their presentations in a “mock” conference.

“I invite the Biology faculty and the campus community to attend and listen to their presentations and inquire about their project,” said Dr. Thai. “I believe that this interaction with the attendees and the questions they ask play an important role in helping the students mentally prepare for the conferences.”

This conference is very beneficial to the growth and recognition of every student who participates. It allows the student to present their research amongst others who share the same passion career-wise, as well as network with professionals who already work within the field.

“It was great,” said Emily Burnett, a student of Dr. Thai’s who wishes to major in clinical microbiology and study infectious diseases. “Being able to meet and talk to not only other students that are on a similar path, but professionals working in the field, was a very valuable opportunity. We saw potential real-world applications for research being done.”

None of this could have been possible without the support from the administration of the college, in addition to the more-than-generous funding secured for them by GCC Vice President of Instructional Services Michael Ritterbrown. “I would also like to thank Dr. Michelle Lum, our collaborator in this project, for helping to advise the students and for printing their posters,” said Dr. Thai.

“If it weren’t for Dr. Thai and her supporters,” said Fiterz, “we would have never had this opportunity to show that, despite the stigma associated with conducting research at a community college, we are indeed capable of competing with universities that dedicate a multitude of resources to their research, with our limited resources.”

Dr. Thai and the help she has enlisted across campus is extinguishing the stigma that community colleges face, while also potentially building a local powerhouse research program. The prestige that the Glendale program garners sets the school up for further future success.

The authentic, hands-on research program gives Vaqueros a competitive advantage over other students looking to transfer to four-year universities. This competitive advantage serves as a premier recruiting tool for attracting the top regional STEM talent, igniting a positive feedback loop of success.

Dr. Thai acknowledged that the bar is now set pretty high for the next wave of students, but it’s not only about winning prestigious awards. “I am always proud of my students,” said Thai. “Their success doesn’t have to culminate to an award, but it sure is an exhilarating experience when it does.”

Fiterz’s triumph can not only serve as a source of extrinsic motivation for the next group, but also as a launchpad for their own success. For if they see further than he, it is because they stood on the shoulders of giants.