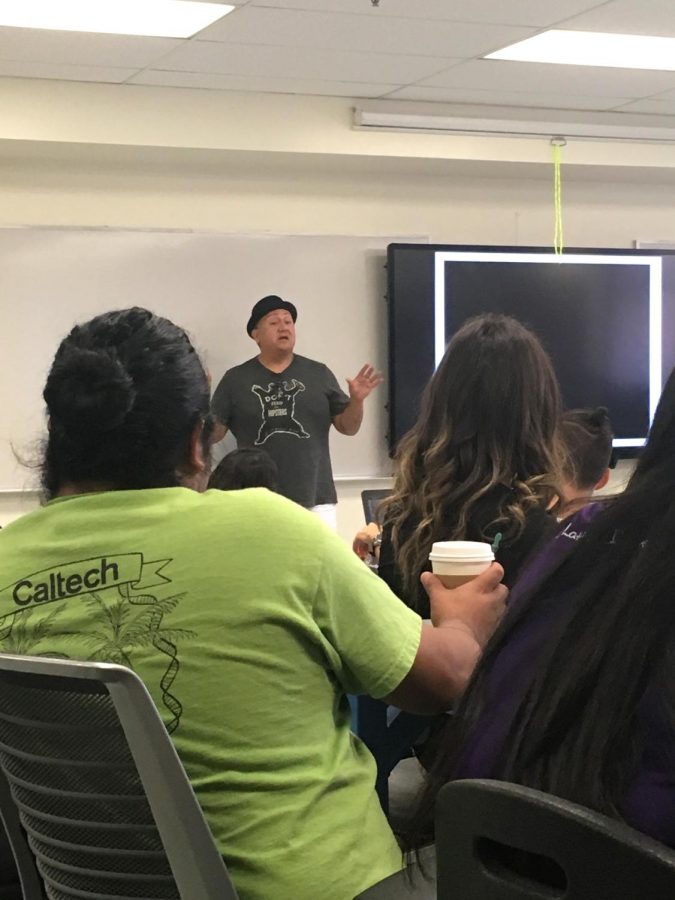 If you truly want something, go out and get it.

That was the message Eddie Gonzales had for the 20 or so aspiring engineering students in attendance during the Oct. 16 meeting for the Society of Hispanic Professional Engineers of Glendale Community College.

Gonzales serves as an administrator in the Education Office at the Jet Propulsion Laboratory in La Cañada Flintridge, Calif., and also travels around the nation seeking to inspire young students on behalf of NASA/JPL.

He opened up the motivational lecture with his experience in little league baseball. As an eight-year-old boy, his mother strutted him out onto the baseball field for tryouts. His first attempt at scooping up an infield ground ball didn’t quite go as planned – the ball missed his glove, rolled up his sleeve and smacked him straight in the lip, which busted open in a display of bloody inadequacy.

There was no time to sulk. He was pushed to the outfield so he could practice catching fly balls, followed by lining up in the batter’s box for hitting practice.

“I wanted no part of it,” said Gonzales. “It might as well have been an arrow on fire.”

And, being a young child in school, the merciless schoolyard bullying followed his long afternoon of baseball mishaps.

Gonzales stuck with it despite his initial failures and spent all summer improving his craft. After starting in the lowest division, he was eventually drafted into the most sought-after “senior” group, even though he was a few years younger than that of his teammates.

His point was: practice. Contrary to what a young Allen Iverson might say about that, practice is what it’s truly all about. You may not be the smartest, or the most talented, or have all of the necessary tools. But never let others out-work you. “They’re not gonna out-hustle me,” said Gonzales.

The main topic of his lecture was opportunity and networking. Opportunity is at the doorstep for many of the engineering students in attendance, but they needed advice on how best to open that door.

Opportunity is knocking in the form of the 29th annual HENNAC STEM Conference in Pasadena, Calif. from Oct. 18 through Oct. 22, and the Society of Hispanic Professional Engineers (SHPE) National Conference in Kansas City, Mo., from Nov. 1 to Nov. 5.

At these events, students will have the chance to rub elbows with some of the premier players in the STEM universe, such as Lockheed Martin, Shell Oil Company and NASA, in addition to meeting some talented, like-minded individuals.

Have a plan for these networking events, Gonzales stresses. Your résumé needs to be professional; you should know which booths you would like to go to; have your essentials ready; be respectful; smile with receptive body language; and, please, dress appropriately.

A big part of opportunity is who you know, which is why it’s so important to network, not just at these events, but whenever you have the chance.

“Meet people,” said Gonzales. “They could be the ticket to your future.”

Practice keeping your phone in your pocket, as it’s tough to find opportunity with your eyes in the wrong place. Rather than mindlessly browsing the web, try something simple like striking up a conversation in line at Starbucks, Gonzales advises, or give someone a genuine compliment.

You can turn that network into a relationship, where you then work on surrounding yourself with people who make you lift your game. As the saying goes, if you’re the smartest person in the room, you’re likely in the wrong room.

Most importantly, don’t be afraid to fail. Embrace your failures when they happen, then learn from them. Just as a young Eddie Gonzales didn’t let a busted lip prevent him from succeeding in baseball, students can’t let failure define who they are.

“Your best teacher is your last mistake,” said Gonzales.