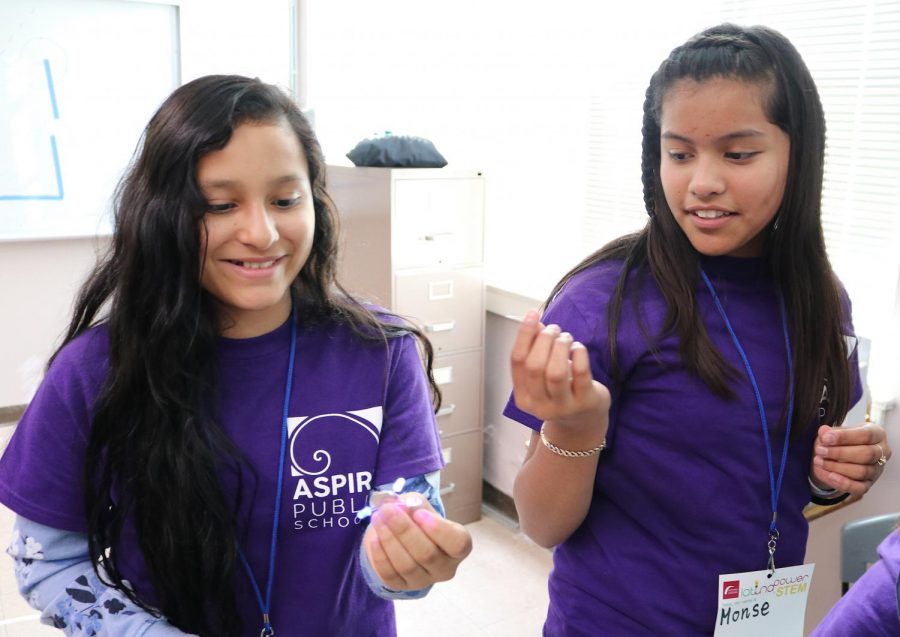 Over 400 students and parents attended, said Richard Cortes, an articulation coordinator and STEM counselor who helped put the event together.

Hands-on student projects were exhibited to show young students the possibilities where coding and robotics are concerned, and workshops led by STEM-working professionals took place over the course of the event.

The STEM field is dominated by males, especially in engineering, explained the organizers, stressing the importance of helping young Latinas enter the field. “Latina engineers only represent 2 percent of the computer science and engineering workforce in the U.S.,” Cortes said. “It is critical that we empower our young Latina students to consider STEM, thus it helps when we bring the role models to them who share the same background and personal challenges.”

One such role model who spoke to young middle and high school students is Elisa Quintana. Quintana, the keynote speaker at the Oct. 14 event, is among just a few Latina astrophysicists at NASA Goddard Space Flight Center in Greenbelt, Md.

Quintana came from humble backgrounds and transferred to the University of California, San Diego from San Diego’s Grossmont College. She went on to earn two master’s degrees in physicians and aerospace engineering, and eventually a PhD in physics from the University of Michigan. In 2015, Quintana received the STEM 2015 Scientist of the Year.

Student attendees got to learn by doing, said volunteers. “In addition, our Glendale Community College departments, which included engineering and computer science, impacted the middle and high school attendees through hands-on learning,” said Marisela Canela, a STEM counselor who also worked to make the event possible. “Student learned about the practical use of Raspberry Pi, a tiny computer, to learn about programming and how to build their own using the SunWind solar car kit.”

Canela explained that it helped to prompt a discussion on engineering design and alternative energy through a multidisciplinary consideration of career in electrical, mechanical and automotive engineering.

“For many of these students, it was their first-time building something on their own,” she said. “Most importantly, they were empowered to believe in themselves.”

Cortes explained that planning for the Latina Power in STEM event commenced in July. It took roughly four months to plan, though has been built upon from previous years. It also utilized the TECHNOLOchicas organization, which seeks promote Science, Technology, Engineering, and Mathematics professions to young Latina students. “Over 100 Latina STEM professionals nationwide come together to share their life stories and journeys with the young girls via Univision commercials, TECHNOLOchicas.org videos, and campus visits like GCC’s Latina Power in STEM conference,” said Cortes.

The college has sought to increase student equity, said Cortes and Canela.

“GCC has been in the forefront in promoting engineering and computer science,” said Cortes. “By way of several U.S. Department of Education and state-funded grants, and because of the passion of many faculty, staff, and administrators, we have been able to develop several student and academic support programs like the GCC AIM Program, the Robotics Academy, the GCC Society of Hispanic Professional Engineers Student Chapter, and our great Manufacturing and Machining program.”