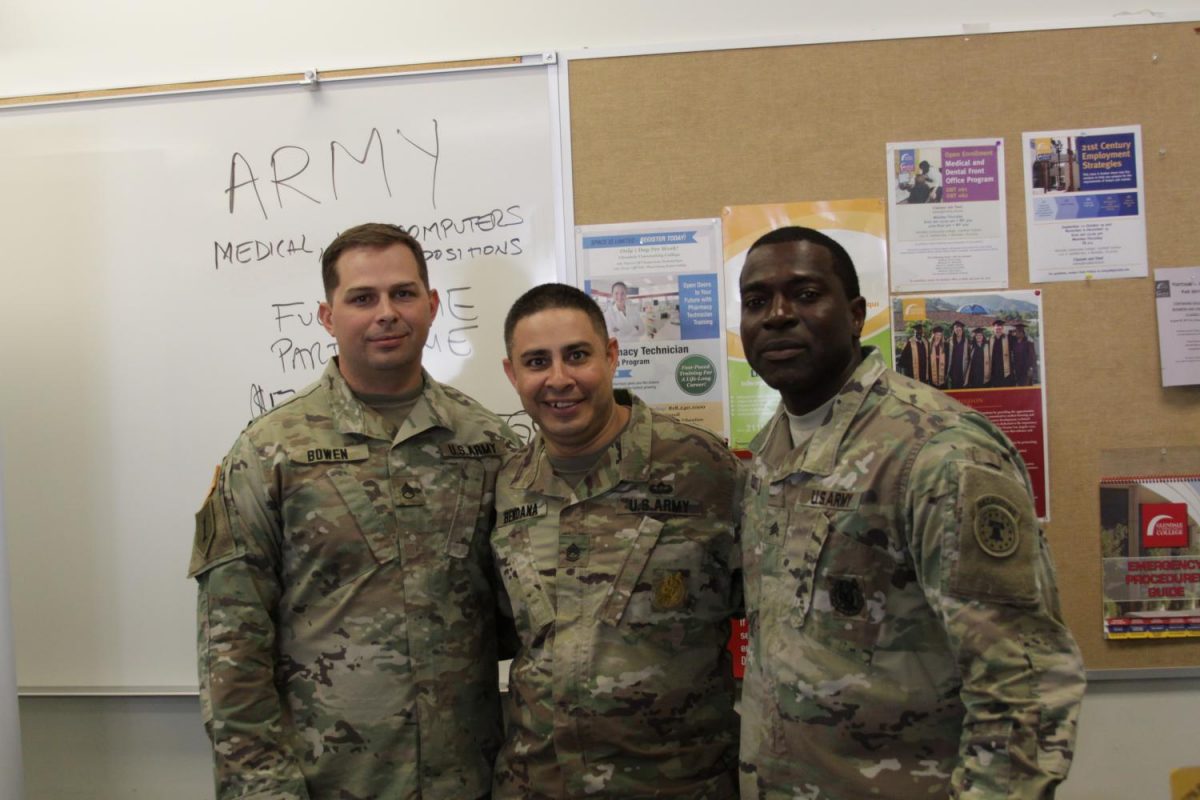 Glendale Community College hosted a career fair Sept. 14 at the Garfield campus, where roughly 600 students and community members attended. It was the first time the career fair wasn’t held at GCC.

“Most of our students have not yet had the opportunity to go to the Verdugo campus of GCC to take advantage of the great services we offer there, including the job fair,” explained the Administrative Dean of Garfield Campus, Alfred Ramirez. Those Garfield students, therefore, have been at a disadvantage when it comes to attending a career fair. Ramirez said that the purpose of hosting the event at GCC’s sister campus was to target an audience of a higher and more mature age than the ones typically served at the main Glendale campus. “With the career fair at the Garfield campus, our students were exposed to a real job fair,” he said.

Over 25 potential employers participated at the event. There booths were varied and included: GCC career and technical programs, the United States Postal Service, Burbank Parks and Recreation, and the U.S. Army. The American Red Cross also had a booth, which appeared to be highly trafficked by attendees.

The diversity of vendors was a goal of the organizers. Ramirez noted the help of student services technician and business administration adjunct instructor Sharis Davoodi. “She made certain that the employers had many entry-level jobs which are more appropriate for many of our students.”

Davoodi helped coordinate the career fair held at Garfield and explained that the outcomes have been positive, including allowing students to go through the interview process for potential career-enhancing jobs.

In a week, a survey of students will show how many of them who were interviewed ended up getting hired. The organizers also noted the help of GCC and Garfield faculty.

“A common remark I received was that the students were prepared to get interviewed on the spot,” said Davoodi. “They were dressed professionally with resumes in hand ready to submit.”

Two Glendale Board of Trustees members, Dr. Armine Hacopian, GCC’s board president, and Yvette Vartian-Davis, showed up. In addition to showing their support, they met with employers and got to hear about students’ experiences.

There are many opportunities to visit job fairs throughout the year. Usually, the main career fair is held here on the main campus during the spring, but there is also a career fair before the holiday season that provides seasonal jobs for students.

This time around, the fair sought to reach out to members of Glendale’s community and the wider region.

Caroline, 18, a Garfield student, said that she thought the Career Fair was a great opportunity, not only for her, but for many other students, “I’ve been in the United States for one year,” said Caroline. “So I’m here to get my GED since I didn’t finish high school in Honduras.”

Caroline wanted to get more informed about the American Red Cross because her career plan is to go into nursing and eventually become a doctor, she said.

The difference between the career fair at Garfield and the ones typically held on the main campus is the size and scale. GCC main campus career fairs hold up to 80 employers, which, in previous years, has meant the attendance of over 10,000 students, alumni, and community members.

This career fair was meant to target the southern Glendale community along with the local student base.

“I am thrilled to see our students getting job offers related to their majors that they have studied so hard for,” said Davoodi. “This is their opportunity to get hands-on experience in the field of their study.”

There have been a total 17 annual career fairs on the GCC campus. The 18th at GCC will take place in the spring, but opening up fairs to Garfield can also help the college recruit more potential students at both college facilities who are looking to expand their skills.

“We surprisingly had a really good turnout and we were very happy about it,” said GCC student employment services technician Sang Nam. “Students were happy that they got to get interviewed by employers. It was very successful.”

Further, the organizers sought to make sure that students and community members with limited  English proficiency could communicate with potential vendors about jobs.

Andra Hoffman-Verstrate, the director of the career services, indicated that making it possible for job seekers without a native English proficiency to find opportunities was key. Ramirez echoed that point.

Elizabeth Mercado, a middle-aged woman, said she was attending Garfield to complete her GED. Mercado dropped out of high school because she decided to run away from an abusive household. She enrolled at Garfield eight years ago but had to take a break from school because she needed to work. She didn’t want to give up, therefore she returned in April.

One of her instructors told her to attend the fair, since she knew Mercado was unemployed.

Mercado said that the American Red Cross booth stood out to her because she wants to help out patients, especially those with cancer because she is a cancer survivor herself.

In 2015, Mercado was diagnosed with cancer and went through six chemotherapy treatments plus three radiation sessions in the following year. This year in June, she was notified by her doctor that she was in the clear and officially cancer free.

In light of her situation, she felt nothing was impossible, but she knew she would have to look for opportunities..

Students who need assistance with jobs or internships should contact the job placement center at (818) 240-1000 ext. 5194, visit the office in the San Rafael building, or check out the year-round online job board at collegecentral.com/Glendale.