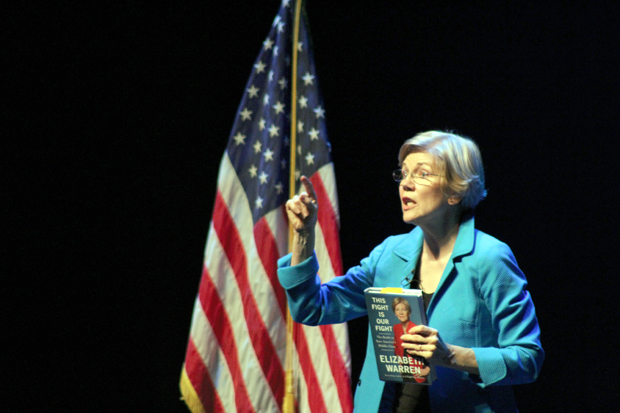 Sen. Elizabeth Warren speaks at the Alex Theatre in Glendale Saturday to two sold-out crowds. Warren was there to promote her new book “This Fight is Our Fight.”

Sen. Elizabeth Warren incited a revolution with a bit of humor while describing the fight for the middle class on Saturday with 1,400 people in attendance.

The Massachusetts Democrat was at the Alex Theatre to promote her new book, “This Fight Is Our Fight: The Battle to Save America’s Middle Class,” reading excerpts to illustrate what she called the struggle to preserve the middle class in the United States.

It included stories about Americans who were — and still are — greatly affected by the recession, the continued misuse of government money, and the wealth and power of the 1 percent.

First, she described an African-American man, Michael, who worked for Nestle and was let go because of the company’s desire to outsource work done in the factory for cheap labor.

Michael ended up losing his house that he spent his entire life savings on. His family had to say goodbye to a place where they made memories and cultivated a life that was thrown out the window by greedy corporate business men.

“It was devastating for him,” Warren said.

Another story that captivated the audience was a tale about Gina, a college graduate with mounds of debt. She enrolled in a for-profit college and eventually could not afford the tuition and had to take out all her loans.

To fully understand the extent of how the U.S. got into this predicament, Warren explained the historical significance of U.S. politics and the economy.

From 1935 to about 1980, the nation saw a restriction with taxation that ultimately allowed for the middle class to thrive and was able to continue on for so many years.

Starting from 1980 onward that is where it all changed for the middle class. The government started taking the legs out from underneath it, she said.

She asserted that in 1980 Ronald Reagan came in with his trickle-down economics, cutting taxes for those at the top, with less money to invest in education and infrastructure and basic research, turning the banks loose to do whatever they want, and deregulating the giant corporations in this country.

Warren is a part of the Consumer Financial Protection Bureau which was created especially for her.

This Bureau was created by the Dodd-Frank Wall Street Reform and Consumer Protection Act which ensures that banks, lenders, and other financial institutions treat Americans fairly and justly.

It takes in complaints from consumers and works with the banks to help them understand their rights and to better their financial futures.

Even though these agencies exist, it is still difficult to get the rights that consumers deserve, Warren said, and now she fears that President Trump could deliver the knockout blow and the middle class will cease to exist.

“This is why I am part of this fight. This why I am fighting back,” Warren said.

To have a solid foundation, Warren explained the basic core progressive values for Americans to ensure that its government is held accountable: a good education, affordable healthcare, preserving the planet, Wall Street regulation, equal pay and that “democracy is not for sale.”

It is not enough to just know the values of the progressive, she said, describing the fight about getting out there and making our voices heard.

Warren participated in the Boston Women’s March. She was so impressed with how everyone was coming together for this fight of the progressive agenda.

“The progressive agenda is America’s agenda,” she said.

Warren shared how she saw a sign that said, “I fight like a girl,” and was thrilled to see people involved something so momentous.

Despite heckling from the audience, Warren was able to answer some key questions about student loan debt, Social Security and climate change.

It was a little unfortunate for audience members that the questions were screened and only consisted of about four.

Warren alluded to nothing about running for president in 2020. But considering the numerous standing ovations and the constant bellowing of support, she had a strong support system here in Los Angeles.

“Our government works for us and that is the bottom line,” Warren said.

Elizabeth Warren for president 2020? Tune in and find out.