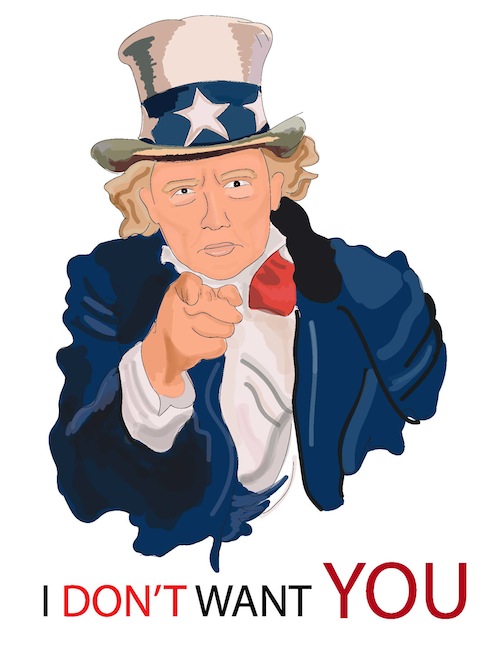 A program started this semester, the Dream Resource Center, is a place where undocumented immigrants can seek help and guidance on campus. The club Voices Organizing Immigrant Communities for Educational Success (V.O.I.C.E.S) kickstarted the initiative.

“What we’re trying to do is create a safe space where we can centralize information for AB 540 students,” said Arely Martinez, a student and resource specialist in the Dream Resource Center.

“It can be hard to do when you don’t have a sense of identity. So, we are trying to offer resources as scholarships and any referrals to legal advice.”

The Glendale Community College Board of Trustees is also making strides to ensure a safe academic space for students. In a unanimous vote during a board meeting in March, a resolution passed regarding the safety and privacy of immigrants on campus.

Board members, along with various constituency groups on campus, passed a resolution that states that school district officials will not inquire about a student’s immigration status. The resolution is meant as a good-will gesture from the district, with the goal of making the college a “safe zone.”

Though it is unlikely that any conflict will arise from the resolution, some GCC students applauded the measure. Swedish-born Vendela Lindblom and Nennah Stromfelt both agreed that it helps foster an inclusive learning environment. “I think it’s a good message.” Lindbolm said. “It makes people feel safe.”

Board member Anthony Tartaglia said the main reason was to show students that they can feel safe from discrimination and harassment.

“We wanted to send a message that we’re an institution of learning,” Tartaglia said. “All of the board members are different. We have different political views, [we are] different genders, different ethnicities — but we can all come together for all of our students.”

The resolution comes in the wake of the controversial immigration policy decisions by President Trump and his administration. Attorney General Jeff Sessions threatened to cut federal grants from local police jurisdictions known as “sanctuary cities,” where officials stated that they won’t hold undocumented immigrants unless they commit a serious crime.

Despite a conflict between the school district’s rhetoric and Trump’s, Tartaglia doesn’t foresee any federal backlash from adopting the new resolution.

“I don’t think we’ll be targeted,” Tartaglia said. “We’re such a small institution, and many of the other college districts are taking similar positions.”

According to the Washington Post, the number of U.S. Immigration and Customs Enforcement (ICE) arrests of non-criminal immigrants has doubled since Trump has taken office.  The Los Angeles Times reported that the number of sexual assaults reported by Latinos has dropped dramatically across the country since the 2016 presidential election — including a 25 percent drop in Los Angeles and a 40 percent drop in Houston. Many experts credit the drop to a recent fear of deportation.

According to the Los Angeles Daily News, 1 out of 8 children in California has an undocumented parent. California Association of Latino Superintendents and Administrators executive director, David Verdugo told the Daily News that the high anxiety of both the parents and the students “is taking away from the academic focus we want to maintain throughout our respective districts.”

V.O.I.C.E.S. has been active throughout in regards of legislative agenda. The club has supported bills to incorporate resource centers all around California and were one of the first co-sponsors of such bill.

“We’ve now established a place where an undocumented student can come feel safe be able to share their experiences, empower themselves, and more than anything become educated about the advantages they have through this center,” said Tartaglia.