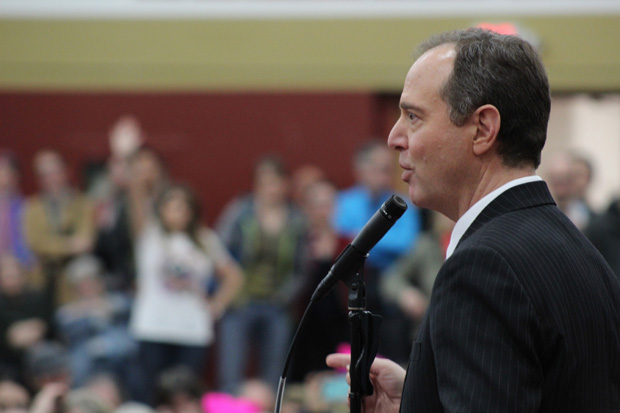 The auditorium, which seats 400 people, proved to be too small, and about 800 more attendees had to watch the Feb. 24 meeting about the travel ban and refugee crisis via a live feed projected in the “overflow room” located in the gymnasium.

As the Democraic congressman hit the stage, the crowd greeted him with a standing ovation. “I feel like walking out and coming back in again,” Schiff said.

After the roarous applause died down, Schiff expressed his gratitude for the crowd while throwing a subtle jab at his opponents in the White House.

“As I was driving up and seeing all of you lining up to come in this evening, I thought ‘That doesn’t look like AstroTurf to me,’” said Schiff, referring to the comments by presidential Press Secretary Sean Spicer about the Inaugration crowd size.

He went on to implore the crowd to continue to show up and protest against controversial decisions by the current administration.: “Each and every time we need to speak out… to say, ‘This is not all right. This is not going to be accepted. This is not America.’”

Schiff, who represents the 28th district and is the ranking member of the House Permanent Select Committee on Intelligence, has been a vocal defender of the Syrian refugee program for quite some time. In 2015, after voting against the American SAFE Act, (a legislative proposal that requires extra vetting for Syrian and Iraqi refugees before entry into the United States), Schiff issued a statement that said, “There are persistent threats to the country from ISIS, Al Qaeda and homegrown extremists, but they do not come from women and children fleeing the violence in Syria.” The SAFE Act has since been passed by the House.

Schiff’s views haven’t changed. During the town hall, he stated that the travel ban, is “completely counterproductive” to the safety of the country, and is “an effort to exclude people on the basis of their faith.”

The U.S. is the largest refugee resettlement country in the world. Since the Syrian civil war erupted in 2011, over 11 million people within the region have been displaced, unable to return to their country of origin for fear of persecution. The U.S. Syrian Refugee Program has been accepting refugees for resettlement since October 2011 and over 18,000 have been resettled in the U.S. since then. The executive order that suspended the U.S. Refugee Program for 120 days, also suspended the Syrian Refugee Program indefinitely.

Joined by a panel made up of members of several public service and civil rights agencies whose main goal is to help those  “directly affected” by the recent executive orders. Panel member Hector Villagra, Executive Director of the ACLU of Southern California, touched on the legal battles the nonprofit organization has faced in the wake of Trump’s Muslim ban.

“We said, ‘If you enact a Muslim ban, we will see you in court,” Villagra said. “We carried out our promise and we sued him.”

The U.S. Circuit Court of Appeals has stated that the government’s appeal of the travel ban will carry on as planned, with the first brief due to the appeals court March 10.

The panel became increasingly emotional as each member described horror stories people have endured  since the travel ban. Villagra went on to say that even in these troubling times the enthusiasm of those protesting against the travel ban and the suspension of the refugee program have been inspiring. “I’ve never seen anything quite like it.”