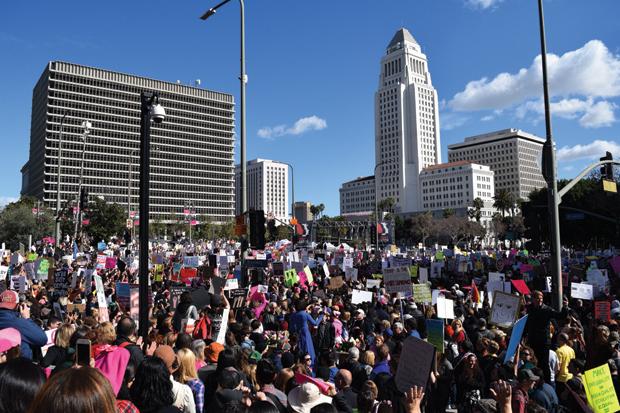 L.A. WOMEN: Hundreds of thousands joined in the peaceful protest in front of City Hall in downtown Los Angeles on Saturday after marching from Pershing Square. The march far exceeded expected crowd numbers.

After days of heavy rain, the sun came out for hundreds of thousands of protesters at the Women’s March in downtown Los Angeles on Saturday, the day after Donald J. Trump was inaugurated president of the United States.

An estimated 750,000 activists participated in the march, according to the Los Angeles Times. Mostly women, but also men and children, took to the streets as a sister event to the Women’s March on Washington.

The streets were engulfed with signs of protest and chants as thousands marched from Pershing Square to the steps of Los Angeles City Hall.

“To the little ones, the future belongs to you and it is our duty as grandparents to tell you about the America that we know, that we believe in, that there will be a future for after we get rid of this nightmare,” said speaker Hannah-Beth Jackson, a California state senator from Santa Barbara county.

“I wasn’t asking for anything but respect, and I still have my respect and my pride. I march for me and all of you who have gone through this trash. I persevere,” a tearful woman echoed to the crowd regarding a sexual assault encounter. In jeans and a sweater, she held a sign that read, “This is what I was wearing. Don’t let your ‘leader’ tell you I was ‘asking for it’.’”

Despite a significant police presence, no arrests were made during the march in any of the participating cities.

“I’m a woman of color, I grew up in a household of a woman who is gay, and all the things that this administration is against, is what I, myself represent and I want to fight against that,” said Venisha Jeff, Fearless Feminists Action Committee member.

“I’m angry and disappointed, but I want to be about action, that’s why I’m here.”

Journalists and crowd analysts estimated the crowd size of the Women’s March far exceeded Trump’s inauguration on Friday. Photos of the events revealed a much larger crowd for the Women’s March, which boasted 275,000 DC Metro rides before 11 a.m., surpassing the figures from the previous morning.

Trump’s press secretary, Sean Spicer, drew criticism after he said in a press conference on Saturday, “This was the largest audience to ever witness an inauguration, period, both in person and around the globe,” in reference to Trump’s inauguration crowd size. White House aide Kellyanne Conway defended Spicer during an interview with “Meet The Press” host Chuck Todd, saying Spicer was using “alternative facts.”

The Women’s March on Washington website requested “10 Actions in 100 days” after the event on Saturday, encouraging activists to continue to contact their elected representatives and get involved with causes.