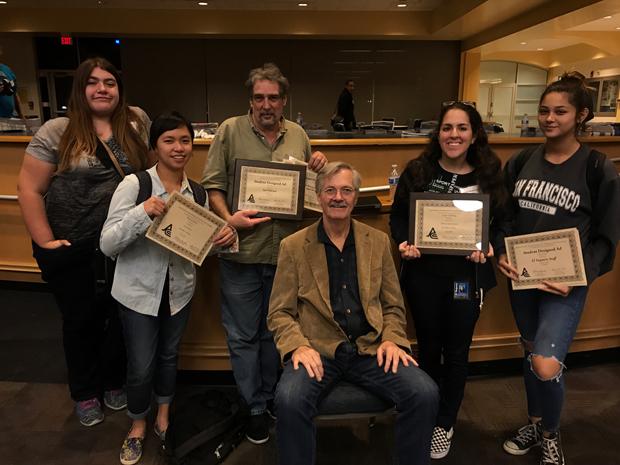 When I became adviser to El Vaquero 1998, I barely knew what an adviser did, and the first student staff looked at me as warily as I did the task ahead.

There was a crusty and wheezy retired copy editor who held the adviser job as an adjunct, and I had been hired to teach a couple of English classes. (Language Arts back then included Journalism and English). I was introduced to the part-time adviser and was asked to help him out because he had been struggling with health problems. I found that there were only four students in both Journalism 103 and 104, and no designated student editor — nor for several semesters had the introductory Journalism 102 class been offered.  There seemed to be no particular urgency to get out a newspaper. I was told that El Vaquero came out sporadically and only when the small staff could actually get it together.

The student government, which has always been generous in financial support, had pulled back funding until the paper could show that it was worth the investment.

As adjuncts, both the wheezy retired copyeditor and I parked at the top of the hill, before there was a parking structure and before the elevators. Those stairs were daunting. One of the first things my colleague told me was that he hated climbing up that hill and that he was afraid he was going to have a stroke if he did it one more time. A few days after that, he said, “Michael, I can’t deal with this anymore. Why don’t you just take it over?”

I was astonished at first. But soon after that David White, chair of the English Department, and Vice President Chris McCarthy, met with me to ask if I could take over the paper. I said sure, I would be glad to. I had taken a buyout from the LA Times a couple of years earlier and my freelance dreams weren’t paying the bills.

In my first meeting with the staff as designated adviser, I asked who the editor was. No one responded, but a lanky fellow who appeared to be in his early 20s stepped forward and said he’d do it if no one else was interested. It was a start.

He was a nice guy, but he preferred playing cards outside the AD building to working on the paper. But somehow we got it together. I didn’t know much about the page design program that was installed on the two occasionally operable computers in the room and neither did the editor. What I figured we needed was QuarkXPress and someone who knew how to navigate it. That someone turned out to be David Glover of the business department, who saved our first few issues for us. Later, I met Charles Eastman of the Art Department, a graphic artist who became indispensable to El Vaquero for most of the time I have been here.

After I served a couple of very challenging semesters as an adjunct, David White, the English chair, told me that a full-time position was being considered and that I might want to apply for it. The teaching assignment was to combine journalism and English classes and it would require master’s degrees in both English and Journalism — both of which I luckily had. It seemed like a perfect fit.

When I went to the final interview, with Chris McCarthy and long-time college President John Davitt, McCarthy said something I will never forget: “You can’t have a college without a newspaper.”

That has been a guiding principle of the college and I know it is also the belief of our current President David Viar. And I thank them and all the administrators, the college support staff, and my faculty colleagues for their invaluable support over the years.

But most of all I owe thanks to the dedicated student writers and photographers and editors who have worked so hard and believed so strongly in journalism to have made El Vaquero a newspaper that is respected around the state for its excellence.

I have been privileged to work with some of the most dedicated and accomplished students to have passed through the campus over the past 20 years. I have seen many of them go on to work in print and broadcast journalism or public relations or other communications-related jobs, and I have maintained lasting friendships with several of them.

I have seen writers and editors work well into the night to get their stories right and to make the paper read well and look as good as it can. And if writing weren’t enough of a challenge, I have been in meetings where the staff haggled over the merits of various typefaces, over whether to change the logo style, or even whether to rename the paper. But El Vaquero has seemed to stick.

More than 150 newspapers have been published since I started, and there have been nearly 20 editors. They typically served for two semesters, although two editors resigned within a few weeks — one because he had to take a full-time job and the other who seemed to have developed a phobia against working with other people. A previously serving editor jumped in to fill the void. There was never a missed paper, although there were many story deadlines pushed to the limit — sometimes because of that one last interview that was needed, other times because of procrastination. One of the hard lessons to learn is the sanctity of deadlines.

Working for the newspaper is unlike most other classes. It provides lessons in responsibility like almost no other discipline. A college newspaper is actually a business. There are budgets to prepare and meet, bills to be paid, advertisers to appeal to, and readers who expect to see the paper appear with clocklike regularity, and for stories to be fair and accurate.

As I look back over the years and the staffs that passed through San Gabriel 140, I feel honored to have known most of these people, and sad that I won’t see how they and future instructors will move into an increasingly digital world, and how they will fight the battles against the purveyors of fake news and the trivialization of what is an honorable profession.

When I was 18 and 19, I was in and out of college and I was an indifferent student. I liked to read and I thought I wanted to write, but I wasn’t doing much about it. It took me a long time to find my way. As I write this, I am looking from my office into the newsroom on a cold January night. Some of the most motivated students from the fall semester have reported on several stories that are going into a special mid-winter issue. There is no journalism class in the winter. They are not doing this as an assignment. There are no grades, no extra credit. The bylines you see on the stories in the issue are names to look for in the future. These are people who will make a difference in the world.

We have just celebrated the 20th birthday of our editor-in-chief, Melody Shahsavarani. You can see her name on the masthead and on her Grammy story. Entertainment is her passion. She’ll be editor into the spring and then plans to transfer to the USC Annenberg School. She has come a long way since I first started working with her two years ago.

It occurred to me that she was born the year I started teaching. It’s a good time for me to say goodbye.

The paper will be in good hands.