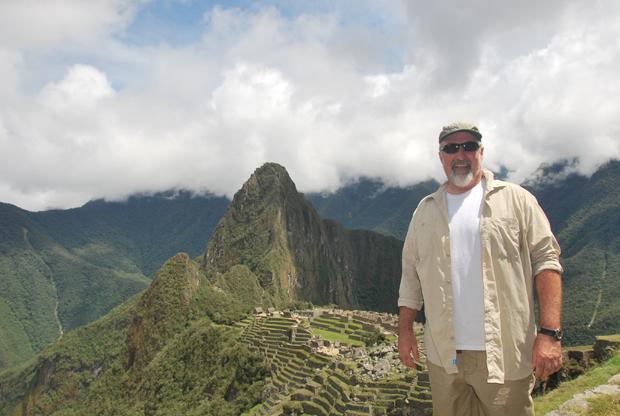 INCAN CITY: Professor Darren Leaver poses high above Machu Picchu in Peru on one of his many international trips.

Professor Darren Leaver has traveled to 74 countries and still has 121 left on his to-do list.

Leaver was awarded the Distinguished Faculty award on Nov. 29  for his 21 years of teaching at GCC. Leaver is the director of the study abroad program and an assistant geology professor.

As the director of the travel study program, he creates an environment for students to learn through field-based experiential learning, defined as learning through active participation in an activity then taking time to reflect on the outcome.

“We all grow, and we grow at the pace that we’re most often comfortable with,” he said.

“Travelling will accelerate that in a very positive way. You learn so much about yourself, so much about your limits. They get pushed farther than you thought possible in a certain amount of time. There are things that will stay with you throughout your life that you can draw upon to get you through mostly any situation.”

Leaver is married to Laura Englund-Krusse, also a geography professor at GCC and has two daughters, Khalia and Maia. He attended Cal State Northridge, receiving a bachelor’s degree in earth science with a minor in geology and a master’s degree in geography.

He grew up in Leicestershire, England where his parents ran an orphanage. He attributes his inspiration to studying geology to David Attenborough, a naturalist and filmmaker, who found fossils just outside the hills where he grew up.

In 1975, he moved to the U.S. and four years later, at the age of 15, made his first trip overseas around Europe. “I was bitten by the travel bug,” he admits.

During his college years, he used his student loans to travel again to Europe for a seven-week trip. This is when he learned about trains and traveling as economically as possible with only a suitcase for his belongings.

He earned his master’s July 1991 then went on a trip around the world.

Again, his backpack was filled mostly with film, camera gear, and guide books.

Leaver was hired in 1996 as a full-time geography professor, which allowed him to travel and to create travel opportunities for students.

Leaver and his wife Laura share their zest for travelling with their children. They travelled with their first born daughter as early as 7 months old.

“It’s in her blood,” he says about his daughter, who is now 15. “She’s mentioned she wants to go to college in Europe.”

When asked about the most beloved place he has travelled to, “I have different favorites for different reasons,” he said.

“For natural beauty, New Zealand and Nepal. They are equally gorgeous places and I feel really at ease when I travel there. Both cultures are very welcoming. The other would be Bali because the diversity of Indonesia. You can spend time in the mountains. You can do snorkeling. You have komodo dragons and orangutans and the people of Bali are wonderful. It’s just a really phenomenal country.”

Leaver and his family began abcBali, a non-profit educational foundation to teach Balinese children English in rural villages. Four other professors at GCC have also helped create abcBali along with Leaver.

Two of the three schools are named after former students, Robin Carlson and Ryder Buck, who each passed away after participating in the study abroad program.

This program serves 400 students in three villages with students ages eight to 13. The curriculum’s emphasis is on learning English through Balinese culture and environmental education.

“It taught us to be independent,” Minasyan said. “It forced us to leave the classroom and learn outside. Forced us to get out of comfort zones, leave the bubble we know and mingle with different cultures and people from all walks of life.”

For his next travel feat, Leaver hopes to visit Antarctica and see more of Southeast Asia.

Leaver thanked his family for their support and the administration and board at GCC for the honorary award.

“We can inspire our students and they can also inspire us and that happens all the time,” he said.