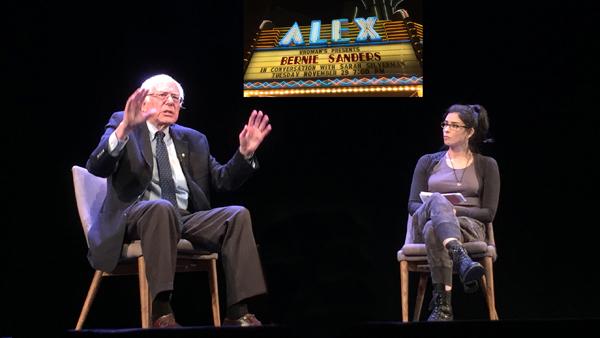 FEEL THE BERN: Comedian and actress Sarah Silverman interviews U.S. Senator Bernie Sanders in front of a sold-out crowd at the Alex Theatre in Glendale on Nov. 30.

Glendale welcomed Vermont Sen. Bernie Sanders and comedian Sarah Silverman to a sold-out crowd at the Alex Theatre on Nov. 29 when he brought his book tour and a discussion to the stage.

An event coordinated by Vroman’s bookstore, with the help of the Glendale Arts, filled the room with over 1,400 supporters to hear Sanders discuss his book “Our Revolution: A Future to Believe In. He welcomed comedian and actress Sarah Silverman as she interviewed him on hot topics from the North Dakota Access Pipeline to the future of this country.

His book divides into two parts, it begins with recounts from the start of his campaign and how it ended up taking over Democratic establishment. “The most significant act accomplished is that every state in the country we ended up winning big time, the young people vote,” Sanders said.

He shares personal experiences from the campaign trail, recounting the details of his historic primary fight and the people who made it possible. The second part outlines the continuation of his political agenda of creating more jobs, raising wages, protecting the environment and providing universal health care.

Sanders was welcomed to the stage with an overwhelming show of support, that drove a standing ovation, with some crying and cheering for their once hoped-for presidential candidate. He began a solo discussion on the podium, first thanking his supporters and reassuring everyone that hope is still intact if “we all come together.”

“The American people are on the side of a progressive agenda,” he said. “That’s important to understand and not to forget.”

Sanders shed a light of hope after the results of election night. “As we try to figure out how best to deal with a President Trump, and I’m as reluctant as you to say that phrase,” he said.

He reiterated his key points from the campaign trail, sharing that the Republicans are representing the billionaires, the top one percent and of course Wall Street.

Sanders continued to say that as a nation we cannot progress on discrimination and bigotry, a factor that led to Trump’s presidency. “Please don’t believe members of Congress can do this alone. We need a mass movement who are engaged, your role in the political process. We need more than just your vote.”

The theater was engulfed in another set of cheers as the momentum continued. Sanders told the crowd that Sen. Chuck Schumer, the next leader of the Democratic Party, chose him to handle outreach to key party constituencies. “I assure you I will outreach. We will restructure and reform the Democratic Party,” Sanders said.

He finished his half hour speech with taking action on climate change. “I am worried on what planet we will be leaving to our children and grandchildren,” he said. “That is an issue we cannot compromise on.” Sanders also said Trump needs to listen to scientists and not just the fossil fuel industry.

As comedian Sarah Silverman took the stage, some were escorted out as loud boos and shouts could be heard. One supporter yelled, “You’re ridiculous Sarah!” referring to h

er line at the Democratic National Convention protesting “To the ‘Bernie or Bust’ people, you’re being ridiculous.”

Silverman opened the discussion with a question she said “has been on everybody’s mind since the election.”

“What the f—?” Sanders nodded and clarified if that was the end of her question, laughs were heard all around. He responded that he too was shocked, but protested we can’t accept to moving backwards with Trump’s ideology.

“Trump re-wrote the rules of politics,” Sanders said. “The lesson to be learned is that we have to rethink politics as well, but we really have to define our role in a democratic society.”

Silverman admitted that this was her first interview, which was no surprise to Sanders as he jokingly mentioned her rambling. She questioned why the Obama administration had not acted on the North Dakota Access Pipeline, which on Sunday U.S. Army Corps of Engineers ruled against.

He maneuvered around targeting President Obama in his answer, but emphasized that, “This country has been trampling on sovereignty rights of Native Americans for hundreds of years.”

Her jokes brought a good balance between the heavy topics discussed that night. Silverman admitted she was enraged with fear and anger, a common factor she thought Trump supporters felt during the campaign trail.

“They’re all about being ‘number one,’ but why is being number one so important?” she said. “Number one in what? Juvenile diabetes.”

The Vermont senator ended the night with a promise, to never back down on the future of this country and the next generation.

“We are very powerful if we choose to exercise that power,” he said. “You have the right to demand [a voice] in the world [in] which you live in.”