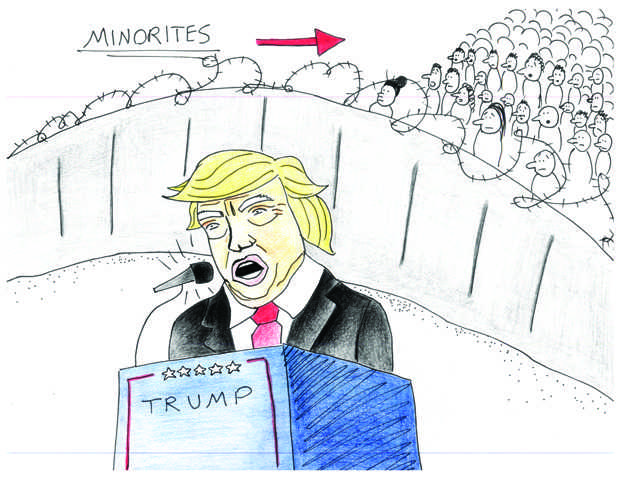 After a tumultuous election cycle, Donald J. Trump has become the 45th president of the United States of America.

Shocking millions of liberal voters, he pulled to an early lead and maintained it. How this reality television star, who gained his support through fallacies and unethical rhetoric managed to capture the heart of the American voter is unclear, but what is certain is that America has regressed to the point where racism and sexism are values that are not only tolerated, but celebrated.

Trump’s campaign had been built on free media coverage of his misogynistic, xenophobic, and racist comments. His slogan  “Make America Great Again,” is an ironic statement from  the first candidate to fail to win the support of every current living president. He started off the race with his idea of building a wall along the Mexico/U.S. border and having the Mexican government pay the costs. We’ll see how well that works out.

Here are some of the repercussions of this historic night. With a majority in the Senate, Republicans will dismantle the Affordable Care Act, appoint a Supreme Court Justice which will take away women’s reproductive rights, defund agencies such as the EPA and the Department of Education and give tax breaks to billionaires. Refugees and immigrants are at risk. LGBT rights may be a thing of the past. As of this writing, the economy is imploding.

Hillary Clinton seemed poised to win but with a week away from the election, FBI Director James Comey sent a letter to Congress saying the FBI had discovered emails in a separate investigation that could be connected to the now-closed investigation of whether Clinton mishandled classified information. After two investigations were completed, Comey declared that Clinton would not face any charges. Whether this unwarranted allegation caused incalculable damage to Clinton’s chances will be debated over the next few days and perhaps for years to come.

Clinton started her second bid for the presidency with a strong social media presence, and the help of fellow of celebrities. She drew from vast experience, having spent nearly her entire adult life in public service. But that was not what America wanted.

Trump and Clinton were the two least popular presidential nominees in modern history. He had constantly attacked his opponents, hopping onto Twitter in the middle of the night to share, to start and settle feuds, and drive the news media in his field. He had gained over $2 billion in free media according to The New York Times.

His support among Evangelical    Christians has been nothing short of astonishing. Trump owns casinos, has been married three times, and his current wife, Meliana, is a former nude model who worked illegally in the United States.  Prior to this election, he had shown no interest in religion. However, his running mate, Gov. Mike Pence, will bring his own conservative ideology to the White House. Pence has a track record of opposing minimum wage increases, pro-womens’ choice and anti-Planned Parenthood. In 2015, Pence quietly signed the Religious Freedom Restoration Act, a bill that effectively made it legal for business or religious institutions to discriminate against lesbian, gay, bisexual and transgender individuals by asserting their “religious freedom.”

Early voting reported Trump with a lead, but after his victory in the key states of Ohio, Florida, Texas and Pennsylvania, his way forward was secured. He had continued to have a significant lead all the way to the end, with a 25 percent support of the Latino vote, according to CNN.

When elected, every president since Franklin D. Roosevelt has outlined his set of goals to accomplish in the first 100 days in office. The plans include the economy, immigration, and healthcare.

Trump has emphasized on wanting to deport all 11 million undocumented immigrants. His first hour in office, he has vowed to get rid of “those people.”

He has also promised to abolish Obamacare as soon as he enters office.          America has elected a C-list celebrity, not a President. Trump is known for his pageants, controversies and money, not for having talent. The people decided they wanted a man from the outside to get their voices to be heard. They cast their ballots to “Make America Great Again.” We are rewriting history, by going backwards not forward.