College Enrollment Is the Lowest Since 2012 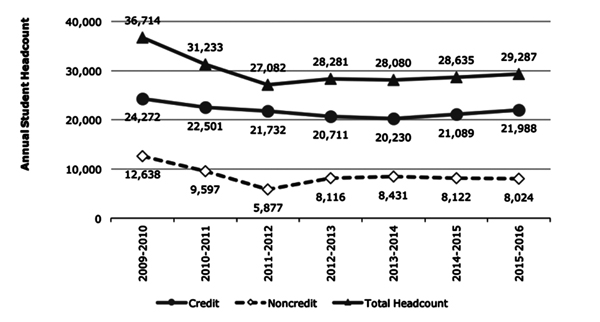 Challenged by years of declining enrollment, the college is reaching out to the community to find ways to improve services to current and prospective students.

Preliminary ideas from the community were gathered by the Enrollment Management Committee for consideration and they will sift through what will be most relevant to the college. By the end of November, the committee is looking to arrange open forums with the campus community to discuss the proposals.

“Nationwide community college enrollment is diminishing,” said Michael Ritterbrown, vice president of instructional services. “And that always happens when the economy gets better.”

The state only counts FTES or Full-Time Equivalent Students towards funding. It measures the contact hours that students have per semester and 525 contact hours count as 1 FTES. It also makes a distinction between residents and non-residents. Only resident students are funded by the state.

Tuition paid by resident students goes directly to the state and comes back to the school on apportionment based on FTES. Meanwhile, non-residents who pay more in tuition go straight to the college.

“The community college system in California bases its apportionment, which is funding, on growth,” Ritterbrown said. “Each college is expected to maintain a certain level of enrollment and additional funding comes from growing from that base. If enrollment does not pick up to the level that it was before or greater, then you will see a reduction in your base [funds].”

The issue with enrollment growth will have a great effect on the school in the long run because it will affect the state funds coming in.

The improvement of the economy is one of the factors that affect enrollment, with students choosing to join the workforce rather than enroll in college.

The limited population in the district as well as the decreasing number of high school graduates also influence the number of students that enroll in the college.

“The community college student population is declining in Glendale,” said Peter Stathis, co-chair of enrollment management committee. “We need to attract more students from outside of the district.”

In 2015, President David Viar introduced “Touchpoints for Growth” to address this problem. It is an ongoing strategic plan that the school has adopted to increase enrollment. He raised key areas that need to be addressed regarding this issue.

First is public awareness, dissemination of information about the college and what it has to offer needs to be increased.

“We do extensive outreach to our feeder high schools but it is possible that we might expand that to some of the other areas,” Stathis said. “We do a lot of that already and we have to continue doing that but maybe we’ll do even more if possible.”

Another challenge is the application and enrollment process. The school is working to make it easier and faster for students to apply and enroll.

In an effort to support student success, the college website is being redesigned and is scheduled to launch on February 2017.

“The new website is solely going to be student-focused,” said Marc Drescher, chief information systems officer. “All the internal and business stuff is being moved to a campus intranet site. So it will hopefully structure the site in such a way that will be a lot easier for students to navigate.”

The college is hoping that by making the website easier to maneuver, students will be encouraged to apply and enroll. They are also working to make the site more responsive and user-friendly.

“The importance of the site working seamlessly on phones, tablets and all devices was a big focus of it,” Drescher said. “The layout and structure of the content will be much easier to navigate and use recognizing that students primarily use mobile devices.”

A makeover is also something to look forward to in this new site.

“It has a refreshing look—new feel, new look—but it will incorporate some of the current site’s features,” web coordinator Patricia Chamroonrat said. “The left navigation and main menu will be there but overall it looks different.”

A week after the new website’s launch, students will still be able to access the current site for information while they learn how to use the new website.

Programs and course offerings as well as schedules are also challenges that the school faces. A long-term plan being considered is adding and expanding programs according to student demand.

In terms of scheduling, the school has been conducting surveys on problems that students encounter. The top two problems are full class schedules and classes not being at the time students want. These issues have been addressed over the years but the school is continuing to look for ways to improve in this area.

Student turnover is also a factor in the rate of enrollment. A lot of students who enroll in the fall often choose not to return for the spring semester.

“Retention is one of the biggest challenges that we face and we work very hard to understand what challenges the students face,” Ritterbrown said. “The biggest problems that influence students’ persistence are work and family, followed by financial difficulties. We do our best to address those as we can.”