Statewide Props: Bullets and Buds on the Ballot 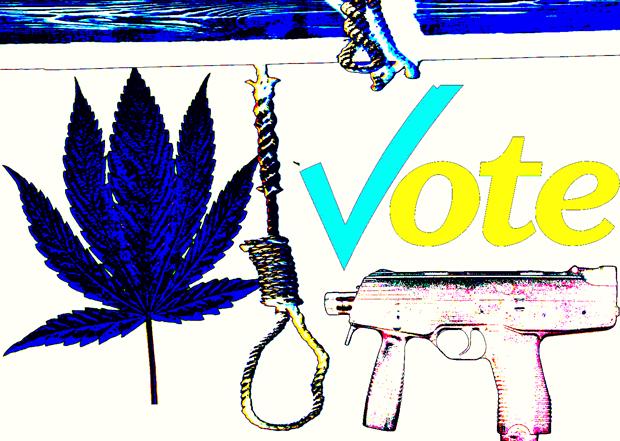 Statewide propositions will include hot button issues regarding education and healthcare funding, tax increases on the wealthy, tobacco tax increases, gun restrictions, the recreational use of marijuana, and the repeal of the death penalty.
Proposition 55, The California Extension of the Proposition 30 Income Tax Increase Initiative, would increase taxes on individuals with incomes over $250,000. The revenue will be  given to K-12 education, community colleges and healthcare services for low income people.
Proposition 30, approved in 2012, raised taxes on individuals with incomes over $250,000. A vote for Proposition 55 would be an extension of Proposition 30, raising between $4 million and $9 million in taxes.
In an op-ed for The Sacrameno Bee  Jon Coupal, President of the Howard Jarvis Taxpayers Association, said: “The reality is that we don’t need higher taxes.”        “The state budget recovered from a $16 billion deficit in 2012 and is balanced. We have reduced debt, increased school spending and put billions into the ‘rainy day fund’ and still have a $2.7 billion surplus.”
Eric Heinz, president of the California Teachers Association, will vote in favor of the bill due to the recent threat of teacher layoffs, therefore returning classes to larger sizes and the elimination of art and music classes.
“We know what it looks like when funding for schools dries up,” Heinz said. His union is leading the yes on Prop 55 campaign.
Propositions 56, Tobacco Tax Increase, a combined state and constitutional amendment, would increase the cigarette tax by 87 cents per pack bringing it up to $2.87 per pack. This includes other tobacco products and electronic cigarettes containing nicotine.
Because vaping nicotine is fairly new, it has been generally unregulated. This means that vaporizer cigarettes would be taxed just as other tobacco products.
The tax revenue would be allocated to physician training, prevention and treatment of dental diseases, Medi-Cal, tobacco-use prevention, research into cancer, heart and lung diseases, and other tobacco-related diseases.
Proposition 63, Background Checks for Ammunition Purchases and Large-Capacity Ammunition Magazine Ban would prohibit the possession of large-capacity ammunition magazines and would require most individuals to pass a background check and obtain state authorization to purchase ammunition.
This bill comes after the rise of mass-shootings where the perpetrators used high-capacity magazines, such as the AR-15, to carry out their crime.
The California Police Chiefs Association came out publicly in opposition to the bill.
“[Proposition 63] fails to meet the appropriate balance between public safety and individual gun rights,” Ventura Police Chief Ken Corney, association president, wrote.
A Los Angeles Times editorial was in favor of Proposition 63, stating that they wanted more, not fewer limits to gun access.
“National studies show that people will access to guns are three times more likely to commit suicides and twice as likely to be the victim of violence,” the LA Times wrote. “If we want a safer country, the answer is not, as the NRA argues, to make guns more readily available; it is to reduce their presence.”
Proposition 64, the California Marijuana Legalization Initiative, will legalize recreational use of marijuana and hemp under state law and enact a 15 percent sales tax as well as a cultivation tax of $9.25 per ounce for flowers and $2.75 per ounce for leaves, with exceptions for medical marijuana.
Provisions relating to rights of employers, driving under the influence, and marijuana business locations are still intact.
“You make something more accessible and give the perception that it’s okay, people are going to use it more, I really believe [Proposition 64] is just about money,” Koko Tabibzadeh, Glendale community activist, said in opposition to the bill.
“If the sole purpose of this bill is to keep people out of jail then why make edibles, why have pot shops?” Tabibzadeh said. “Medicinally, it has already passed and so many people use it for non-medical purposes, so why  make it more accessible and make it in forms that are so kid friendly like brownies and lollipops.”
Celebrities, like Shawn “Jay-Z” Carter have endorsed the bill. Carter released a short film about the history on the war on drugs, calling it an “epic fail” and favoring Proposition 64’s impact on criminal justice.
The initiatives will be decided by California voters on Nov. 8, the day of the presidential election.