Dueling Democrats Duke it Out in the 43rd District 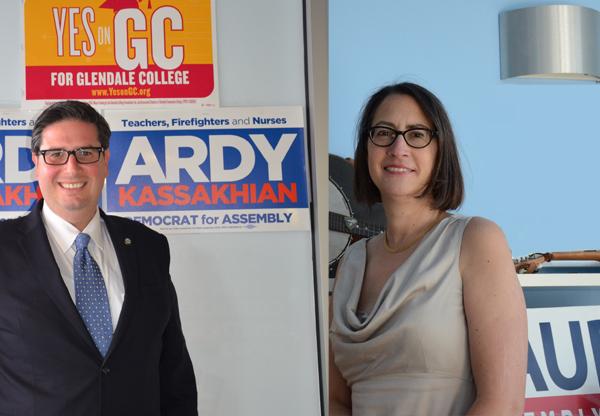 STATE ASSEMBLY: Democratic candidates and opponents, Ardy Kassakhian and Laura Friedman pose in their respective campaign headquarters while gearing up for the Nov. 8 election.

Democrats Laura Friedman and Ardashes “Ardy” Kassakhian are fighting for a seat in the State Assembly this November for representative of the 43rd district.
The district includes Glendale, Burbank, La Crescenta, La Cañada Flintridge and the Los Angeles neighborhoods of Atwater Village, East Hollywood, Franklin Hills, Hollywood Hills, Los Feliz and Silver Lake. The State Assembly convenes at the California State Capitol in Sacramento.
Out of the eight candidates, they came out as the top two winners of the primary elections held June 7 with Friedman garnering 31.9 percent with 24,372 votes and Kassakhian gathering 24.3 percent with 18,618. The new primary process elevates the two  top-scoring candidates to the general election even if they are from the same party.
They are competing to replace outgoing Assemblyman Mike Gatto who cannot run for office due to term limits.
Friedman has been a member of the Glendale city council since 2009 and is now in her second term. She has served as mayor of Glendale in 2011 through 2012.
“I’ve been a councilmember for more than seven years and it’s an extension of the work that I’ve already been doing in the community,” Friedman said. “I just see a great need and I’ve been able to address a lot of important issues locally but a lot of the policies that impact the community come from Sacramento.”
Before entering politics, she worked in the film and television industry for 20 years prior to opening her own small business in 2001 that specializes in vintage jewelry and the arts.
“I bought my first house in Glendale and got involved in neighborhood issues as a homeowner and resident,” she said. “I decided to get into a position where I could have more impact, which was running for city council.”
Kassakhian, on the other hand, has been Glendale’s city clerk since 2005 and was re-elected twice for the position. He was the youngest person to ever be elected for public office in Glendale.
“Working in city hall – working with local businesses, members of the community and individuals – I see every day how government works for people and how sometimes it can be an obstacle for people to overcome to be able to do the things they want to do,” he said. “That gives me a much more unique and deeper understanding of government.”
He is a homegrown candidate who attended public schools in Glendale and graduated from UCLA with a degree in history.
“I decided to run for State Assembly because I think that now is a very important and critical time in our state,” Kassakhian said. “We have had an economic recovery but that economic recovery hasn’t touched every single life. We really need a vision for California that is going to have sustainable growth.”
Both candidates stress the importance of funding education.
“I think we need to better fund education all the way from kindergarten and preschool up to college,” Friedman said. “We have to realize that investing in education is really the best investment that we can make and it will pay back in terms of being able to keep businesses in California and attract businesses here.”
She also talked about exploring public-private partnerships in curriculum development to align the curriculum and develop a workforce with the skill set that large employers want for their businesses.
Kassakhian stressed the importance of graduating from college without debt. He promoted making college more affordable by stabilizing tuition rates.
“One of the things we can do is increase the funding for community colleges and one of the ways of doing that is through Proposition 55, which I support strongly,” he said. “Education is important and it should be our top priority. When you get an education it opens up doors to you.”
Housing affordability is one of the struggles that many residents of the district face. Both candidates have stated the need to require a percentage of new developments be dedicated to low-income tenants.
One of the differences in their opinions is on where to place these new developments.
“The lack of affordability is directly related to availability,” Friedman said. “You can track the number of units that have been built in Los Angeles with the growth of residence. We have not kept up with the pace of that growth. And as we haven’t kept up, the prices have risen steadily in regards to that demand increasing and that demand not being able to be met.”
She explained that by not having enough housing units available, the prices of renting or buying residential units have increased and that allowing the creation of more developments can make housing more affordable.
Meanwhile, Kassakhian believes in developing housing in areas where there is room for growth and where developments are not dense, but also providing good public transportation for those places to be more accessible to people.
“What we’re seeing is people leaving this area and moving to other places where it is more affordable,” Kassakhian said. “When people build developments we have to make sure that at least 10 percent of those are affordable.”
The two candidates have also emphasized the importance of keeping jobs in the area, focusing on the entertainment and technological industries, and creating a workforce that will cater to these sectors.
Both camps have amassed a huge number of endorsements and with the elections less than two weeks away, they shared their thoughts in winning this election.
“It would be silly to be confident but I am very hopeful,” Friedman said. “I’m working very, very hard to make sure that we could get our message out to the voters.”
“I am confident in winning because I do believe that the voters are smart, they are informed and they will read before they cast their ballots,” Kassakhian said. “I have never changed my message. From the first day I ran I have said these are the reasons I’m running – jobs, education and neighborhood safety.”