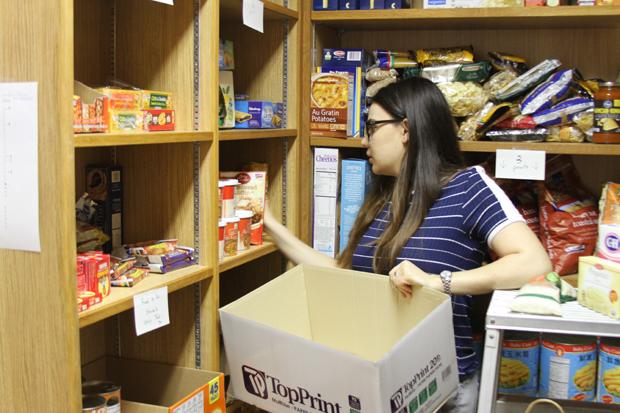 FOOD FOR THOUGHT: Tatevik Shahinyan puts together a food package.

It is hard to imagine a student here on campus not having enough food to eat regularly, it happens often in colleges. The Academic Senate has taken steps to help those students in need with the new GCC Food for Thought Pantry.

With an overwhelming correlation found in studies between college students not having enough to eat and underperforming in class, a task force was developed by the Academic Senate, to find a solution. The food pantry was the answer.

“Twenty to 25 percent of students have severe food insecurity,” said Paul Mayer, chair of the task force.  “Fifty four students have visited in the last week.”

No student is turned away or asked for proof of need, making it accessible to everyone. The food pantry also offers a few items for students with children, including diapers.

Each item they receive is given a point value no higher than three, according to size and price. Each week a student is given 10 points to spend, on

The food pantry gets donations, not only from students, but from local restaurants, churches, and volunteer groups throughout the community. There are collection bins across both the main campus and the Garfield campus, where any non-perishable food can be donated, the food for thought pantry also accepts money donations.

“Every dollar donated is spent on food.” said Paul Mayer “That’s one of the reasons it works so well.”

The Food for Thought food pantry is a non-profit project and is run by volunteers, in which cash donations are solely used for food. The money is spent at grocery stores, where they sometimes get discounts for being a non-profit.

“This program helps students go for their goals” said Tatevik Babayan a volunteer at the pantry “because when you are hungry you can’t study and this helps.”

The project has only gotten positive reactions since its start, not only from the students and faculty on campus but the surrounding community as well.

“We have been  receiving nothing but unfaltering support from the faculty, staff, administration, and students.” said professor Ellen Oppenberg, the outreach coordinator for the task force. “In addition, community groups have also come together to support us with generous financial contributions.  It is truly heartwarming.”

The pantry has big plans for the future, including expanding to add another pantry to the Garfield campus and helping the student there as well. The pantry also wants to expand into perishable items that need to be refrigerated, as well as meal cards for the cafeteria.