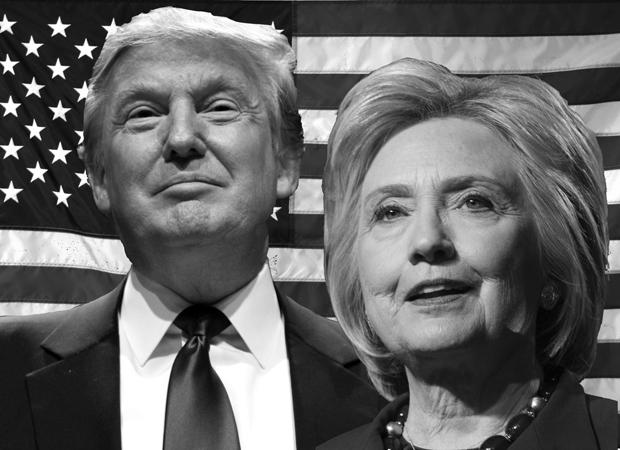 When Republican presidential nominee Donald Trump and Democratic nominee Hillary Clinton took the stage at Hofstra University in Hempstead, N.Y., Tuesday night for the first of three scheduled debates, they both appeared amiable and cordial.

They shook hands, smiled and headed for their respective podiums, much like boxers knocking gloves and taking separate corners in the ring — ready for the fight of their lives.

Moderator Lester Holt of NBC Nightly News set the ground rules and explained the format of the debate. There would be three main topics: America’s Direction, Achieving Prosperity and Securing America.

Holt asked each candidate for an opening statement on what they would do to improve the job situation in the nation.

Trump replied in a soft and muted voice, speaking of how jobs are moving to foreign nations, how immigrants are taking our jobs and how big manufacturers like Ford Motor Co. are moving to Mexico and China, a country that is devaluing the dollar.

NPR Fact Check – In fact, over the past two years, Beijing has been selling off some of its roughly $4 trillion in foreign exchange reserves to prop up the value of its currency, the Renminbi (RMB) or Yuan. This has contributed to a lower U.S. trade deficit with China. Beijing allowed the RMB to appreciate against the dollar for about a decade until 2014, leading the International Monetary Fund to judge the RMB as fairly valued in May of last year. — Anthony Kuhn, International Correspondent

Trump, off topic, spoke of his plan to lower taxes, especially on corporations, citing how well that worked during the Reagan era. Clinton quickly interjected that Reagan’s “trickle down economics” failed and did not help the middle class and, in fact, may have caused a recession. In her first zinger of the evening, Clinton called her opponent’s plan, “Trumped up.”

In that conversation exchange Trump failed to say exactly how he would keep American business from leaving the country. “We just won’t let them leave,” Trump said.

At this point, Trump began to sidestep every question and attempted to introduce his own familiar campaign talking points. This continued for the rest of the 90-minute debate.

Clinton was well-prepared, confident and knowledgeable. Trump became more aggressive and stammering. Just 20 minutes in, the Republican candidate began shouting when Clinton called him out on his climate change denial. Trump shouted emphatically that he never said that.

NPR Fact Check – Actually, Trump has called climate change a “hoax” on several occasions. He said on “Meet the Press” that he was joking about China’s role. Politifact said,”On Dec. 30, 2015, Trump told the crowd at a rally in Hilton Head, S.C., ‘Obama’s talking about all of this with the global warming and … a lot of it’s a hoax. It’s a hoax. I mean, it’s a moneymaking industry, OK? It’s a hoax, a lot of it.’ “

Clinton continued to answer Holt’s questions succinctly. On taxes, she had the chance to chastise Trump over on not releasing his tax information like every presidential candidate has done for more than 40 years. Trump gave his patented “When my audit is done, I will release my taxes” response, then steered the conversation to the alleged 30,000 emails Clinton deleted. Trump said he would release his taxes if she would show the remaining emails.

Clinton laughed and accused him of hiding something from the American people.

This topic brought about Trump’s biggest gaffe of the night. Clinton accused him of paying zero taxes in the last 15 years. Trump interrupted saying, “That makes me smart.”

This also gave Clinton the opportunity to mention Trump’s record of not paying some of the contractors he hired in his building projects,  to which he replied, “Maybe they didn’t do good work.”

On race relations, Clinton said we must face the challenge of improving schooling equality, training police officers and changing the justice system to fight systemic racism and doing something about the gun epidemic by changing the laws.

Trump’s idea was to make stop-and-frisk a federal law because, as he said, it worked so well in New York.

Holt interrupted saying that stop-and-frisk was found to be unconstitutional because it promoted racial profiling. Trump vehemently disagreed saying that ruling came from a very “against police” judge.

NPR Fact Check – Lester Holt is correct. Stop-and-frisk was ruled unconstitutional by a federal district judge. The city appealed, and after a change of mayor the case was settled before the appeal.

Trump repeated his claim of a few weeks ago that  Clinton started the “birther” rumor  against President Obama. Trump said he ’personally ended the rumor. Holt was quick to steer the candidates away from this side track.

Trump managed to insult African-Americans  and Hispanics by saying that they are living in hell. “You walk down the street and you get shot.”

Clinton brought up a lawsuit against Trump in the ’70s, in which he was censured for not renting to people of color.

Trump admitted he lost the suit, but “without admission of guilt.”

The last topic discussed was national security. Holt asked the candidates what they would do about cyber crime.

Again shifting the subject off topic, Trump talked about his disapproval of NATO, then when returning to the topic of security he said, “America has fallen down on cyber. We need to get better at cyber.”

Trump’s comments set Clinton up for a few snappy comebacks during the evening. Arguably the most tweeted and shared moment on social media was when he basically derided her for being ready for the debate.

“I think Donald just criticized me for preparing for this debate. And yes, I did,” Clinton said. “And you know what else I prepared for? I prepared to be president. And I think that’s a good thing.”

Polls taken immediately following the debate declared Clinton the clear winner at 76 percent. Whether or not this will have any affect on the election is yet to be seen.

The candidates will clash in their second debate at Washington University in St. Louis, Mo. on Oct. 9. The single vice presidential debate between Republican Mike Spence and Democrat Tim Kaine will be Oct. 4.