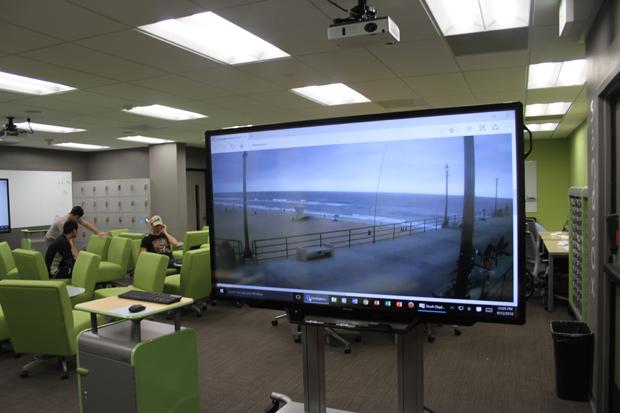 The GCC Sandbox lab on the 3rd floor of the SR building, room SR321, is now open at 7a.m. on MTTh. If you want to get here early to avoid parking issues and have an amazing and comfortable space to get your work completed, you should checkout the Sandbox Lab.

As the construction of the Sierra Vista building nears completion, renovations of other campus facilities are in progress or already completed.
The Sandbox Lab located on the third floor of the San Rafael building in SR 321 has been furnished with state of the art equipment.
Light and airy, the lab contains  interactive touch screen monitors, two Makerbot 3D printers and rows of computers. Although specifically designed to support computer science and information systems, the lab is open to all students.

According to Brett Miketta, assistant professor of computer science and information systems, the key goal of the “Sandbox” is to provide an environment where students can discover their passion for science, technology, engineering and Mathematics (STEM). Miketta said that everything from the ground up had student input.

“It’s like no other lab in the country that I know about and is patterned after the ‘Sandbox’ lab at Bentley University,” Miketta said. “I like to think about it as the GCC version of a Google or Apple workspace where student can eat and  drink within reason, play and experiment with amazing technology, work on assignments, try out a great collection of technology project kits, or just hangout and partake of all the neat and exciting things going on.”

His vision for the future includes connecting the lab with every discipline across campus by establishing short and exciting technology projects that bring us together through hands-on learning activities.

“I coordinated the implementation of a shared vision that included students who wanted a very ‘cool’ space where they could be before and after classes,” Miketta said.

The Student Outreach Center and the Multicultural and Community Engagement Center in Sierra Madre 266 and 267 have been combined. The wall between the offices has been removed and new floors will be installed next week with the project to be completed by the end of September.
The Sandbox lab was financed by Title III Hispanic-Serving Institutions (HSI) STEM GAUSS Grant, a federal grant that Glendale College qualifies for because it has a full-time enrollment of more than 25 percent Latinos. The GAUSS grant focuses on engineering instruction in the context of robotics and STEM is a U.S. Department of Education grant.
Cathy Durham, who runs the Title V division at GCC, said that renovations are moving quickly because the work is supported by 5-year grants that are ending on Sept. 30th.

“These grants are totally for students,” said Durham. “We can only provide spaces [and equipment] that directly affect students.”

“We will create a space for students who don’t have resources or services available to them,” Zariani said. “We will be focusing on student equity.”

To assist small or isolated groups such as first generation students, LGBTQ students or returning adult or older students, the center is developing a group they call Dialogue Cafe, in which they will encourage talk and activities to aid in student retention and community involvement.
The center also works with teachers and students to reach out into the community with volunteer work. Their latest project is the Eighth Annual School on Wheels Drive, which helps homeless children in Glendale and the surrounding area. For more information, visit the center’s temporary office in SC 201 or call (818) 240-1000, ext. 5580.

The HR department in SM265 has temporarily moved to a trailer near the tennis courts while awaiting its scheduled move to the Administration building when Sierra Vista is complete. Meanwhile, renovations to the new Welcome Center in that location must be completed by Sept. 30th.  As students exit the elevators from the parking structure, employees at the center will be there to greet them and answer questions about available services and how to get around campus.

After five months in its temporary space in the San Gabriel building, the Learning Center now has a permanent home in AD232. The center has been renovated with wide open spaces, new flooring, glass office enclosures, conference rooms, new furniture and large circular LED lights that hang from the ceiling. A wall was replaced between the offices and a conference room and windows were added so that group tutoring sessions can be monitored from outside the room.

“Students used to complain about the bad carpeting and low lighting, especially at night,” said Shahoian. “The new LED lights and soft seating will allow students to be comfortable through long tutoring sessions.”

The campus library has implemented renovations with more to come. Eric Hanson, dean of library and learning support services said the library has completely repainted and recarpeted the collaborative open space of the library and the computer workstation area they now call the Library Commons.

“These areas have also been updated with brand new furniture that allows students to plug in electric devices without leaving their seats,” said Hanson.  “There are more comfortable, café-style seats next to the windows and two buffet/booth tables that seat up to six  students comfortably.”

The study rooms on the third floor have also been repainted, carpeted, and equipped with dry-erase white boards to replace the old chalkboards.

According to Hanson In the year to come, they hope to renovate the reference desk area, the lounge space under the library dome, and the entire fourth floor, which will become a silent study space incorporating a variety of seating options from open tables, to carrels and study pods.
Kreider Hall in SR138 has received a complete facelift with fresh paint, new flooring , seating and LED ceiling lights. The stage floor was also replaced and new curtains are due by the end of September.
Division Chair of Social Sciences Michael Dulay said the 27-year-old classroom was due for an upgrade.

“Michael Ritterbrown [Vice President of Instructional Services] and I have been talking about bringing the campus into the 21st century for a while now,” said Dulay. “He and the former Vice President, Dr. Mary Mirch, have been extremely supportive.”

Dulay spoke with hundreds of students about what changes they would like to see in Kreider Hall.

“What most students wanted were larger writing spaces, but mostly they wanted charging stations for plugging in their computers to take notes,” Dulay said.

According to Dulay, the seating with extra-large writing desks would have cost $190,000, and they had to compromise for a size slightly larger than the existing fold-out desks, but the seats now have the coveted charging stations.

“We spent more to update the electrical,” Dulay said. “You can’t see the work that was put into it.”

The concrete below the floor had to be driven into and trenched to run new wiring and avoid possible shortages in the old electrical system.

The Kreider Hall project was paid by a college maintenance fund, an instructional equipment fund and the lighting and electrical were paid by a state energy conservation fund.

All of the above departments have more changes coming soon.