New ASGCC President is Man with a Plan 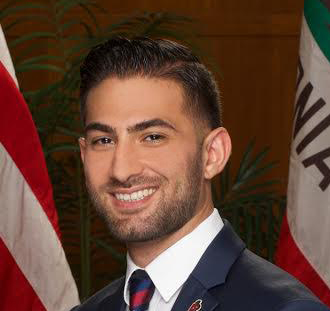 Emin Azarian: Has ambitious plans for the future.

Emin Azarian, 27, newly elected president of the Associated Students of Glendale Community College (ASGCC), lives by the quote “life is not a problem to be solved, but a reality to experience.”
He began his journey at GCC two years ago as a political science major, finding interest in honing leadership skills and getting involved with student government.
He believes he has found greater purpose with a foundation of leading. After serving as senator and vice president of activities, Azarian became aware that anyone can lead, but it takes a disciplined leader to bring ideas of change and perspective. “I wanted to be a part of history, change and embark on new opportunities,” he said.
With an 872-719 victory, Azarian plans to remarket and rebrand the purpose of student government. He wants students to understand why they are voting. “I want to create better programs for students, more opportunities internally,” Azarian said. He wants to change the bookstore, and develop more programs preparing students for transfer. In his second semester in office he plans to improve on the voting process. Instead of pencil and paper, voting will shift to a digital ballot online.
When he’s not in class or serving as president, Azarian is out serving his community. He plays soccer, reads books and spends time with family and friends.
He is applying to three of his favorite universities: UCLA, USC and Pepperdine.  He plans to pursue his master’s in political science. While he embraces this new journey, he is geared up and ready for all challenges and changes.
He is excited and hopes that everyone will join forces with him by sharing questions and concerns that can better conditions of the student body.