Battle of the Democrats: Bernie Sanders and Hillary Clinton face off 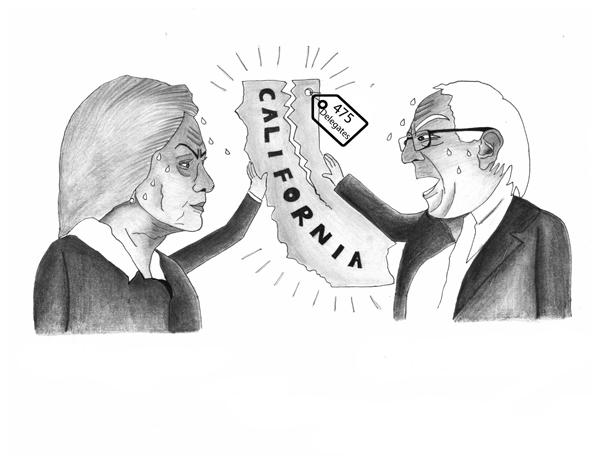 With California’s primary less than a week away, Democratic candidates Hillary Clinton and Bernie Sanders are going head-to-head for the 475 delegates that are on the table.

Former Secretary of State Hillary Clinton has racked up a total of 2,310 delegates, which includes 541 superdelegates. Her opponent, Vermont Sen. Sanders, has 1,542 with  only 43 superdelegates. He was considered the underdog when he first announced his candidacy in April 2015, but he has raised $207 million in supporter donations, $3 million more than Clinton (according to OpenSecrets.org), and beat all odds in climbing the polls.

As the math stands right now it would be nearly impossible for Sanders to overtake Clinton to take the nomination. She leads in the pledged delegate count, but Sanders is winning primaries and drawing huge crowds.

Both would like to win the California primary, of course, but Clinton needs only about 73 of the 475 to clinch the nomination. A Sanders victory June 7 would probably mean that he would proceed to Philadelphia.

Both candidates have spent the past week attending rallies and fundraisers to spark the momentum prior to June 7.

Sanders has effortlessly gained the support of younger voters, but this isn’t something new to Clinton. During her run in 2008, then-Sen. Barack Obama, dominated the youth votes. The 74-year-old’s political ideology, embraced by the young, creates a perception that a political revolution is overdue.

Sanders has concerned himself with middle class issues, including the the nation’s long-lagging minimum wage. By pointing fingers and raising his Brooklyn voice, he advocates a federal minimum wage of $15. “Nobody who works 40 hours a week should be living in poverty,” he tells sympathetic crowds.

Clinton, however, first favored a $12 minimum wage, but as she has now begun to absorb many of Sanders’ proposals, said she supports the “Fight for 15,” a campaign that pushes for higher minimum wages in individual states and cities. She notes that rural areas may not be able to handle this significant increase.

There are continuous selling points from both, but Sanders’ College for All Act has raised  eyebrows as it would make public colleges and universities tuition-free.

His plan would cost “about $75 billion a year,” according to his campaign site.  He introduced this to the Senate in 2015, which would eliminate undergraduate tuition at four-year public colleges and universities.

It would still require states to pay for part of the plan, but students could receive twice as much money in the form of a federal grant. He insists it will be paid for by imposing a “Robin Hood Tax,” on Wall Street, taxing financial transactions from hedge funds to investment houses.

The Clinton plan involves a “debt-free” tuition at four-year public colleges and universities. The tuition will be calculated based on family income. How to repay the loans and the cut of interest rates will be determined by income.

Both plans would will allow students to refinance student debt at current rates, and would lower interest rates on future loans.  Also their plans include free tuition at public community colleges. Many California community college students receive a Board of Governors (BOG) waiver.

The BOG waiver has provided tuition-free education for more than 5.1 million Californians and is currently received by 1.1 million students in California, according to a March 29 press release from the California Community Colleges Chancellor’s office.

On this issue of taxes both candidates opposed the Bush tax cuts in 2001 and 2003, and supported a 2008 bill to increase the tax rate for individuals earning over $1 million.

During his 2008 campaign, Obama stated that anyone making less than $250,000 will be free from paying any tax increase. Now, Clinton has pledged not to raise taxes on middle-class families who make $250,000 or less annually.

Sanders is challenging her stance by proposing an increase on middle class taxes by 2 percent in order to enact the senator’s single-payer healthcare plan system. This contradicts his promise to overcome income and wealth inequality.

This would increase federal taxes by $15.3 trillion over the next decade, according to the Tax Policy Center (TPC). He famously states that “99 percent of all new income generated goes to the top 1 percent.” His tax plan will create an increase for every group, but will benefit the lower income class in the long run.

Each candidate offers reasonable plans to make the future of America bright, but it’s within the power of the people to decide who moves on. As Sanders travels throughout the state to secure every vote possible, Clinton, who was just endorsed by Gov. Jerry Brown, is making a last-weekend appeal to California voters.