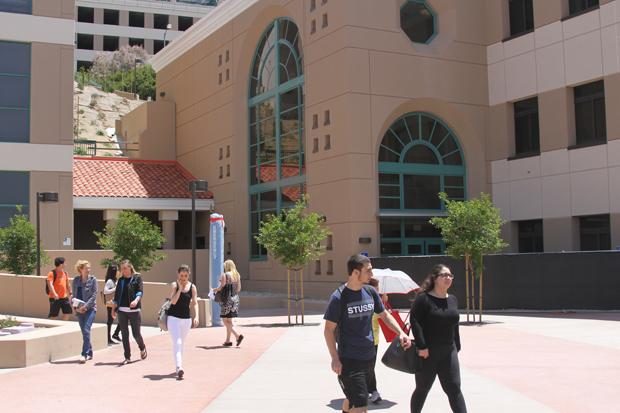 NEARING THE FINISH MARK: A dispute with the contractor has led to suspension of construction at Sierra Vista.

The Board of Trustees declared the immediate suspension of work at the construction site, using its right to call for default termination of the contractor for the project, Nelson Oliveira, director of facilities and construction, wrote in an email.

Mallcraft was asked to leave only materials needed to finish the project.

“It got to the point where it didn’t look like we were going to make fall semester,” Nakasone said. “We talked to the board and said we aren’t making a whole lot of progress; if we take it over and start doing the project on our own we have a better chance of making fall.”

Mallcraft began working on the $49-million building in 2014, and had an original completion date of December 2015. The college and Mallcraft committted to an agreement, which established a penalty of from $2,500 to per day to $6,500  per day for additional days after March 31.

Last September, the completion status of the entire building stood at 75.4 percent. At the end of February it reached 93 percent. The building currently stands at 95 percent, two more than what was reported in March.

Mallcraft presented the college with dates on when they would meet each task, but didn’t always

Inspector of Records and President at 3K Building Services Inc., Khurt Geisse, makes sure the construction is in keeping with the contract.

“Essentially most of the subcontractors performed just fine, but unfortunately when you have to integrate the whole system, it’s like a chain that is only as strong as its weakest link,” Geisse said.

Under their performance bond issued by Travelers Insurance, Mallcraft will not be working on the project any longer, but is still liable for the liquidated damages until it is complete, according to Oliveira.

A performance bond, also known as a contract bond, is a surety bond issued by an insurance company to guarantee satisfactory completion of a project by a contractor.

Normally when a performance bond is executed the waiting period is 90 days, but the college wants to resume construction as soon as possible. It hopes to resume this month and to complete the project by July.

As a precaution, classes will not be scheduled in the Sierra Vista building for fall. When the building opens, the first floor will be occupied by the journalism department, Disabled Students Programs and Services, and a center with two large lounges for collaborative learning.

The culinary program, with 14 classrooms, will occupy the second floor, which includes a patio.

The third floor, which contains the main services students seek, from assessment to registration, will remain in San Rafael and the bungalows until Sierra Vista is completed.

Andrew Feldman, department chair of culinary arts, says they are disappointed by the delays. They’ve spent months sharing space with the kitchen staff in the cafeteria, after the Los Robles building was razed to accommodate Sierra Vista.

“The delay is not just couple of months … it’s over a year now,” Feldman said. “It has limited the number of classes that we can offer. Students going for degrees or certificates are having their plans delayed, nor can we accommodate new students or new classes.”

The Board of Trustees and Mallcraft declined to comment.