10K on the Brand Trail: Glendale Runners Face the Challenge 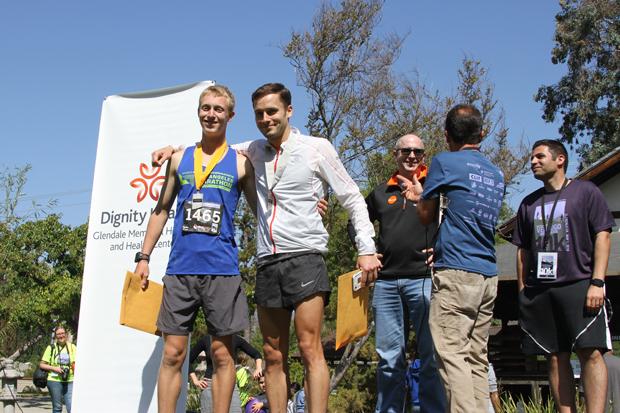 Top winners in the 10K

A 6-mile race began at 8 a.m. with the majority finishing around 10:15 a.m. while the event was scheduled until noon. A diverse group of people of all ages and backgrounds arrived to participate in this event.

Several volunteers came out to support the participants by providing free beverages, pancakes, bagels and bananas. They also had booths where runners and hikers could stop for a 10-minute long massage, along with first-aid after the race. The runners were each awarded with a bag, T-shirt and raffle ticket for a chance to win sporting goods, as well as medals for those who came in first, second and third place.

An award ceremony was held after everyone came back from the Brand Park trail. Age groups and gender determined the awards. As they walked on stage, the crowd demonstrated great support.

The first place winner from the men’s group was Lucas Madison from Altadena, who shattered an  record of 40 minutes and 51 seconds set in 2013 by Quin Kider. Madison ran the course in  38 minutes and 38 seconds.

From the women’s group, Meggy Sheer took first place tying the record course of 48 minutes and 52 seconds that was set in 2011 by Lilian Hernandez. An enthusiastic and friendly crowd cheered on the winners, which made the event even more meaningful.

“We tell people it’s a Sunday they’ll never forget,” Shant Sahakian, president of Open Parks Foundation, said. “It’s a beautiful event, where Glendale residents and even people who aren’t from Glendale come back and see the beautiful parks such as brand that they are supporting.”

Sahakian also assisted in handing out the medals.

Appreciation was expressed toward Davita Healthcare Center for sponsoring countless events over the last 90 years. All proceeds from this event benefitted the Glendale parks, Open Space Foundation, community services and department of City of Glendale. The funds will keep several parks opened and perhaps create new ones for the community.
“From this event I desire people to appreciate the open space Glendale has to offer,” said Kate Eberle, vice president of the Open Parks Foundation. She elaborated on how while running, people are able to see the beautiful environment that they are helping preserve.

Runners were seated on the grass or at the tables, enjoying their meal with the feeling of accomplishment. Nemo Hernandez, a third-year participate says, “I like the challenge, and how it also benefits my community to invest in keeping parks active, while perhaps building more.”

Several participating in the event came from other running clubs such as the Trail Racing Club.

Others participated in preparation for the marathon or for their own personal running desire.

“It’s more of a training race for me,” said Arnie Aguila, a first timer. “I love to run, it’s what I do, and to provide a way to benefit the City of Glendale and myself is always a joy.” He asserted with joy that he would be back again next year.