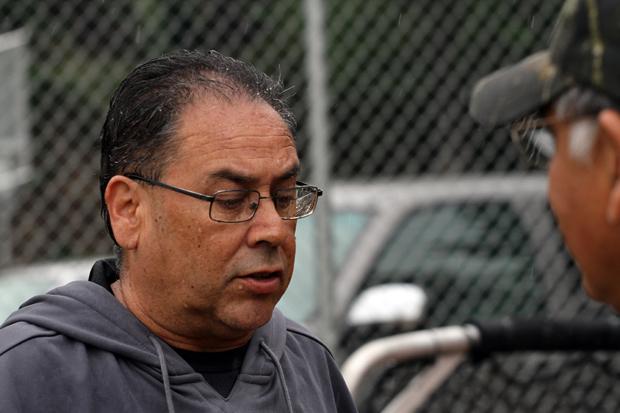 VAQUEROS’ BIGGEST FAN: Louie Garza attends his final baseball game as a GCC employee at Stengel Field on April 7, where he was scheduled to throw the first pitch. The game was rained out, but Garza will return for the final home game of the season.

Long time facilities employee Louie Garza bid farewell to GCC after 36 years of service on April 8, which was his 55th birthday. A retirement party was held to honor Garza that morning in the faculty dining room.

Garza began working on campus straight out of high school and never looked back.  He was present at almost every campus event, setting up tables and chairs and making sure things ran smoothly.

“I met Louie when I was about 18,” Abou-Rass said. “When I came to GCC, I got involved in student government and I was
always calling him for help. I still do”

Garza’s friend and partner Danny Zamora has also been here for 36 years.

“It won’t be the same without him,” Zamora said.

Many faculty members, administrators and staff came out to wish Garza well in his retirement including President David Viar and Vice President of Instructional Services Michael Ritterbrown.

Garza, a Vaqueros baseball fan, attended almost every home game. There he could be seen talking with trainer Jose Gomez and any other fan in proximity.

At a home game on April 11, Garza’s absence was evident.

“We already miss him,” said Gomez