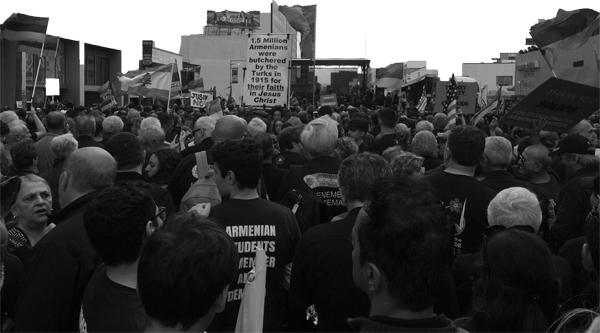 Every year, the Armenian community, near and far, unites in an effort to bring recgonition to  the Armenian Genocide.

While this year marks the 101st anniversary of the massacres of Armenian men, women and children by the Ottoman Turks in 1915, the efforts come at an especially sensitive time as tensions rose between Armenia and Azerbaijan earlier this month.

While the conflict was settled on April 5, the Armenian diaspora plans to make their voices heard through commemorative event held throughout the Greater Los Angeles Area.

From Armenia to Rwanda — All Armenian Student Associations will meet at UCLA in Moore Hall 100 7 p.m. tonight for a panel discussion highlighting the experiences of those targeted in the Assyrian, Rwandan, and Bosnian Genocides and Holocaust.

Western Armenia: 100 Years After the Genocide — Glendale Community College Armenian Students Association will host a presentation on the destruction and survival of Armenian treasures with Matthew Karanian, documentary photographer and author of Historic Armenia in Kreider Hall from 12:20 to 1:30 p.m. Thursday.

15th Annual Commemoration Ceremony — The City of Glendale will honor the lives of 1.5 million victims at The Alex Theatre 7 p.m. Friday.

The United Armenian Concil will host a gathering at the Armenian Genocide Matryrs Monument at 901 Via San Clemente in Montebello from 1 to 3 p.m. Saturday.

Candlelight Vigil — Unified Young Armenians will host a vigil in memory of the victims at Parcher Plaza in Glendale at 6:30 p.m. Saturday.

March for Justice — UYA will initiate a march around Little Armenia, starting at the intersection of Hollywood Boulevard and Hobart Avenue at 10 a.m. Sunday.

Rally for Justice — The Armenian Genocide Committee will lead a rally in front of the Turkish  Consulate on Wilshire Boulevard at 1 p.m. Sunday.

Genocide 101 — A concert to commemorate The Armenian Genocide will be held 6 p.m. Saturday at the Beyond the Stars Palace at 417 N. Brand Blvd.

Silence the Lies: Rock the Truth VIII — K’noup presents the seventh annual social justice concert dedicated to raising awareness of the Armenian Genocide at the Troubadour at 9081 Santa Monica Blvd. in West Hollywood at 7 p.m. Sunday.

Tickets are available at www.silencethelies.com. $20 if purchased in advance, $30 at the door.

The exhibition debuted last April at the Museo Memoria y Tolerancia in Mexico City. Lectures, panel discussions and musical performances have also been scheduled in collaboration with local and regional community partners as supplements to the installation.

“Conversation with the Curator”

“Preserving the Past, Building the Future: the Role of Museums in a Changing World” from 7 to 9:30 p.m. June 2.

Gallery Hours: From 12 to 8 p.m Tuesday and Thursday, from 12 to 6 p.m. Wednesday, and from 10 a.m. to 5 p.m. Friday and Saturday. Visit www.brandlibrary.org for more information.

“Armenia, My Love” —  Feature film that captures the experiences of an Armenian-American artist who paints the story of his shattered childhood as he recalls the struggle of growing up in the Ottoman Empire in 1915.

In theaters for a limited time at select venues. Tickets available at the box office.