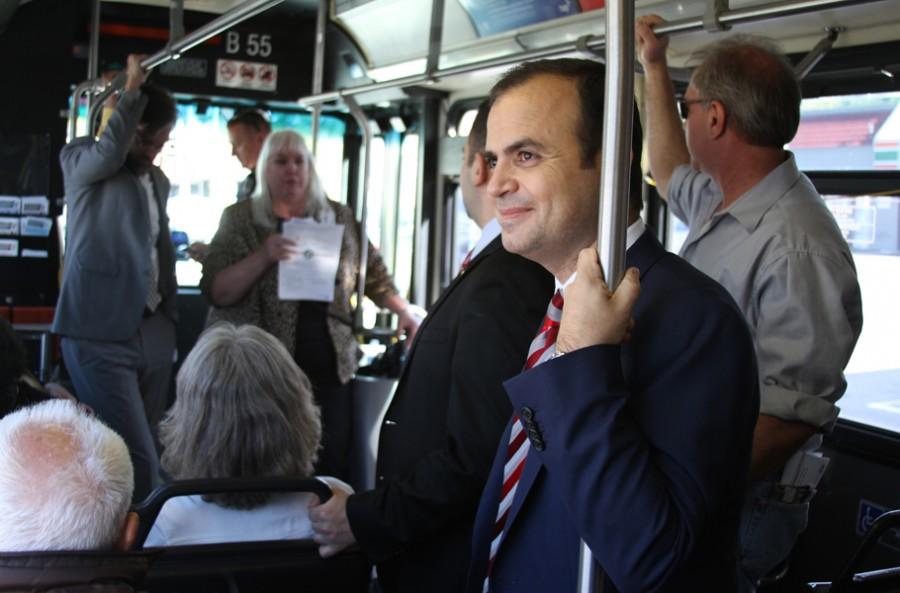 The mobility and transit section of the Community Development Department hosted this month’s “Work Boot Tuesday” meeting, taking Glendale’s council members and residents on a bus ride through the city.

The meeting convened at the plaza fountain of the Glendale Municipal Services building where attendees were given four tokens — one for each bus they would be riding during the tour of Glendale’s transit system — and a booklet filled with facts and figures compiled by the development department.

“We want to give you the full experience,” Philip Lanzafame, director of community development, told a group of about a dozen people. “We want you to know who rides the beeline and where they’re going so we’re going to test it and teach you how to use the tools that our riders use.”

The group was then directed to a demo bus that was parked on Broadway where transit manager Kathryn Engel elaborated on the technicalities of how the buses operate and led a walkthrough of the 40-foot-long vehicle.

Glendale’s fleet of 34 buses are the first to have low floors, meaning drivers have the ability to “kneel” the bus, making it easier for passengers to get on and off. They also feature technology that announces and displays where the bus is going and where it is headed for those who are hearing or visually impaired.

Steps have been replaced with a ramp system to make boarding wheelchairs, strollers and other mobility devices easier, ensuring that the Glendale Beeline is in total compliance with the American with Disabilities Act of 1990 which requires transit providers to make their vehicles accessible to individuals with disabilities.

Sandra Rodriguez, program coordinator for the community development department, said the buses were not altered prior to the meeting, therefore, participants rode along with daily transit users and were exposed to a comprehensive experience.

“[Council members] are riding real buses and getting a normal transit that the average user would experience,” Rodriguez said.

Several factors come into play when planning to take the bus. At any given moment, riders must take into account the ride, wait, walking and transfer times to ensure they are staying on schedule.

Lanzafame warns attendees that missteps and miscalculations can result in delays from where they need to be.

Marc Caraan, a Burbank resident who is enrolled in his second semester at Glendale College where he plans to major in general office, is a frequent transit rider.

He says the bus has been his main form of transportation for the last 10 years as he was diagnosed with autism and is unable to drive.
He takes route seven to GCC every morning and occasionally branches out after class to visit downtown Glendale or Pershing Square.

Not surprisingly, the college is the busiest location as far as daily boardings and drop-offs. Students can purchase Beeline passes through the college’s Bookstore Business Office at a discounted rate. Monthly passes are $30 and 10-ride cards are $9.

Statistics show that getting to school and work are the most popular reasons for taking the bus and most passengers ride an average of four or more times a week with each bus capable of transporting up to 78 people to their next destination.

Russell Breeding was seemingly uninterrupted when the Work Boot group boarded the route one bus to the Glendale Transportation Center (GTC).
“I know everything. I’m a regular,” he said as he proceeded to read “The Chronicles of Narnia.”

The Metrolink trains that travel through the Larry Zarian Transportation Center go places beyond the reach of the Beeline.
It is when commuters arrive at GTC in an attempt to travel to Downtown Glendale where things get complicated.

According to Alan Loomis, the deputy director of urban design and mobility, Glendale officials hope to secure a $1.5 million grant in order to build signs that will help people find their way and improve the area surrounding the transportation center up to quarter mile radius.
“Because of its proximity it is a good place to think about transit oriented development,” Loomis said.

“At the moment there aren’t a lot of transit amenities here other than the parking lots and shade structures,” he added.

“The long term plan that the community department, in partnership with the transit division, are exploring will project a change in this kind of environment.”

While there is room for improvement, most riders are happy with current operations

“The transit experience is pretty seamless so we take it for granted, but it really does take a lot to put these things into action and get them running and funded,” Rodriguez said.

Giving Glendale’s mayor Ara Najarian and council members Paula Devine, Laura Friedman, Zareh Sinanyan and Vartan Gharpetian a tour of these facilities reveals the behind-the-scenes action they don’t get to see or hear about on a regular basis.

Dan Bell, community relations coordinator says “these meetings give the general public access to locations that would otherwise be closed off to them … [allowing] the public to see the exact mechanisms that make each department run and provide services seamlessly to their homes and families.”

While the Transit Work Boot meeting is the last of the initial series, Bell said they are planning on having more in the near future, but have not yet set a schedule.