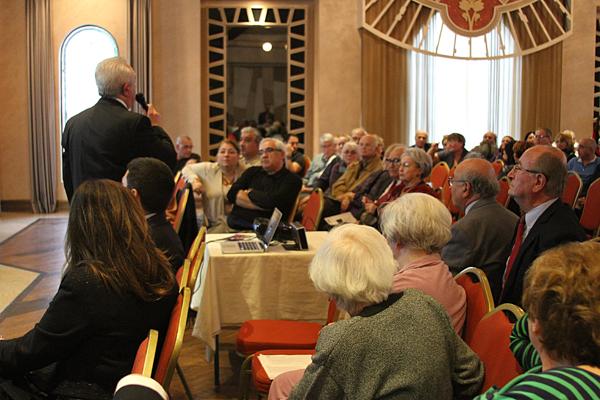 The unveiling of the Armenian American Museum design brought about comments and concerns from community members which were voiced during a two-hour forum held on Sunday at the St. Gregory Armenian Catholic Church near the college on Mountain Street.

The proposed 30,000-square-foot project is planned to replace the current parking lot between the Church and Civic Auditorium on Verdugo Road. It would consist of both indoor and outdoor exhibits and activities.

Plans show that while 50 percent of the museum will consist of a permanent exhibition based on the Armenian American journey, the other 50 percent is available for changing exhibitions; allowing creative freedom and specialized experiences.

The possibilities for the museum are endless and ever changing.

As they filed in for the meeting, attendees received a handout in which a “concerned Rossmoyne resident” lists how the museum will potentially negatively affect the neighborhood.

The Armenian American Museum’s organizing committee takes these points into consideration when working with the Glendale City Council, architect and traffic engineer in order to generate an equitable solution.

A document provided by the forums administrators states that “The Armenian American Museum Governing Board is continuing to conduct its due diligence activities to determine the developability of the site under a Ground Lease Agreement with the City.”

The document also listed the completed activities and those that are still in progress.

Phase one of the environmental assessment is complete and phase two is in progress.

They also initiated The California Environmental Quality Act Initial Study,  which will determine the feasibility of building the Armenian American Museum on that particular site, along with the Comprehensive Economic Feasibility Assessment.

The forums are intended to be a platform for Glendalians and residents in the surrounding areas to express their views about the museum.

“We want to hear the good, the bad, everything,” said the museum’s executive committee member Zaven Kazazian. “We’d like to hear your input, so please don’t hold back.”

Chairman of the executive committee Berdj Karapetian announced the agenda and said their objective is to share the vision and mission of the museum so the public can gain a better understanding of their motives.

Based on recent feedback, homeowner groups to the north and south of the proposed museum site feel troubled about the impact on traffic, vehicle entrance and exit locations, emanating lights, noise and conformity of the overall design.

The organizers of the forum addressed each of the issues during their presentation only to repeatedly face the same questions from the audience.

While Aram Alajajian of Alajajian Marcoosi Architects and Jano Baghdanian of JB & Associates were available to answer questions about the architecture and issues with traffic engineering,

it was made clear that immediate feedback may not be readily available.

Alajajian and Baghdanian presented their tentative plans and anticipated research that is yet to be done in an attempt to answer questions that may arise.

Many of the factors involved in putting the museum together are still up in the air and the committee and board members are working with the city council to figure out the logistics of the situation.

Talin Yacoubian said some of the comments and questions are “premature,” assuring they will be looked at during the upcoming meetings.

Others joined in an effort to praise the committee on their work thus far, agreeing that the location of the museum is ideal considering its close proximity to Glendale Community College, along with the design and the overarching intention of the museum. Although traffic and parking seems to be the strongest argument against this specific location, a GCC student in the audience said “the damage being described is overblown.”

Educators defend the idea mainly because of the ease of access for students and residents who want to learn more about the Armenian cause.

There will be a presentation during the Glendale Noon Rotary’s Feb. 4 meeting at the Embassy Suites in Glendale. Non-members must contact Zaven Kazazian at www.[email protected] in order to attend.