Sartoris Field Will Get Major Makeover 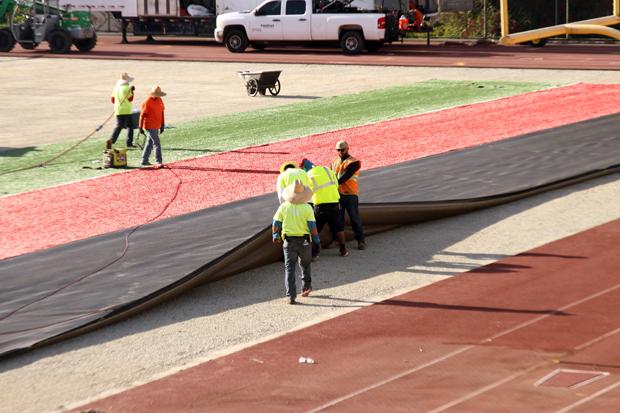 Demolition of the existing track and football field has begun.

The Board of Trustees has agreed to spend $940,477 on renovating the track and field, which was last dealt with 10 years ago.

“It has gone past its useful life,” Trustee President Tony Tartaglia said. “If you look at the track now it’s showing quite a bit of wear and tear. It creates an atmosphere where injuries can occur.”

The suggestion was brought up by Ron Nakasone, vice president of administrative services, who said: “It was a very expensive project, we finally have some money this year to replace the track.”

Before deciding to fund the renovation of both the track and field, college officials decided to work with Mondo, which offered to renovate only the field for $800,000.

Representatives from FieldTurf USA, Inc., offered to rebuild the track and field for about $100,000 more. After looking into the company’s previous work, the green light went off for FieldTurf.

This is the first time GCC is working with the company. FieldTurf has renovated both Ohio State and the University of Arizona. Locally, they’ve worked on the track and field at La Cañada, St. Francis, Harvard Westlake and Mater Dei.

The funding is coming from the state instructional equipment and scheduled maintenance repairs money. This year the school received about $2 million.
The project will be financed over a two year period. This year they are set to pay $450,000 and the remainder will be paid off in 2016.

FieldTurf will start the process during the week of Thanksgiving. During that time, they plan on bringing in the equipment and starting the mobilization.
The renovations will be completed by mid-February, before the spring semester.
The track team is set to start their training at the end of January, as a result they will use Glendale High School’s track and field, according to Men’s and Women’s Athletic Director John Cicuto.