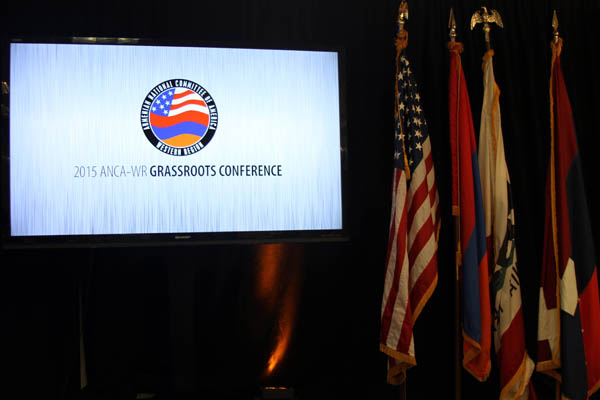 Six panels took place on a stage backlit with the red, blue and orange colors of the Armenian flag during the Armenian National Committee of America-Western Region (ANCA-WR) Grassroots Conference Oct. 23 and Oct. 24.

“I don’t know what to expect, but I am here to learn,” Meghrik Chigani said, a former Glendale College student. She attended the ANCA conference in hopes of supplementing the information she is learning in an Armenian course she is enrolled in at Cal State Northridge.

ANCA is a large grassroots public policy organization that advocates for legislation on key issues that are important to the Armenian-American community.

Specifically, they work to strengthen Armenia as a democratic state, establish a secure and independent Nagorno-Karabakh, support Armenia’s economic development, commemorate the Armenian genocide appropriately, and ensure that Turkey and Azerbaijan adhere to international standards of human rights by lifting their blockades.

As part of their public policy advocacy, ANCA organizes biennial conferences to encourage grassroots activism within the Armenian community. The event invites prominent figures to partake in panels meant to encourage civic engagement.

The weekend kicked off with its first panel on Friday evening featuring actor and author Eric Bogosian.

The session addressed the complex issues of Armenian identity, the relationship between art and activism and his book “Operation Nemesis: The Assassination Plot that Avenged the Armenian Genocide.”

Bogosian also touched upon the centennial of the Armenian genocide and his outlook for what lays ahead. “The Armenians did not just survive the genocide,” Bogosian said. We went well beyond that. We flourished.”

The panel concluded with a book signing by Bogosian followed by a welcoming reception.

The event picked up speed on Saturday morning and lasted through the evening. Panels covered topics including the 2 million islamized hidden Armenians living in present-day Turkey, the rejuvenation of the Armenian Cause after an unprecedented amount of unity demonstrated during the centennial of the Armenian genocide, accountability and reparations, the Nagorno-Karabakh conflict, ways in which to locally advocate for public policy change and finally, alternative routes of raising awareness and grassroots activism.

A much-anticipated panel of the day was with Karnig Kerkonian Esq. and human rights attorney Geoffrey Robertson QC. Robertson worked alongside Amal Clooney to appeal the European Court of Human Rights’ decision in the Perinçek v. Switzerland case and, during his panel, he addressed the case in depth and explained how the final verdict upholds the integrity of the Armenian genocide.

“We had one overriding objective, which was to bury this wretched, irresponsible decision that had cast doubt on the Armenian genocide,” Robertson said. “The deniers can never say again that the European Court of Human Rights has cast doubt on the genocide.”

The panel was followed by a book signing of Robertson’s “An Inconvenient Genocide: Who Now Remembers the Armenians?”

While the subjects of the weekend’s panels ranged widely, the anchor connecting them all was a message of activism.

“Regardless of what election it is, make sure you participate,” said Executive Director of the ANCA-WR Elen Asatryan during the Marching for Justice panel. “Vote for every single office, make your voice heard because somebody else is making that decision for you if you are not doing it,” she said.

This sentiment was echoed by attendees, referred to as activists throughout to the weekend.

“Every two years, we reflect on where we are and what we need to do as a community to get to where we want to be,” Glendale ANCA Board Member Ani Nazaryan said. “It’s a motivating experience for all ages. After all, the grassroots movement thrives off of the actions of each individual.”

“I think the reason why these conferences are important is because it gives an opportunity for Armenian youth to become aware of the issues concerning their community,” said Anush Petrosyan, a former GCC student who attended the conference. “It also gives us an opportunity to connect and meet with professionals, politicians [and] artists.”

The final panel was followed by a networking mixer. While the conference officially ended after the mixer, the weekend’s activities continued on Sunday with a gala recognizing the work of the organization and honoring those demonstrating outstanding dedication to the Armenian Cause.