Following the success of its first phase, Glendale College is ready to save bigger bucks by moving to Phase II of Energy Conservation and Modernization.

The three-phase, $7 million preventive maintenance project was approved by the Board of Trustees in August 2013 and has saved the college over a quarter million dollars.

In December 2012, after conducting a facilities survey, the energy services firm, McKinstry, developed an approach that will reduce future capital expenditures as well as maintenance costs. Each phase would improve the learning environment and modernize facilities.

The improvements included changing the lighting in the library. One student expressed her content.

“I have been at GCC for over three years, and the library always felt like it was not well-lit. I noticed that the lighting has improved, so now I like to spend more time at the library,” said PJ Iddhibhakdibongse, an ASL major.
Starting the fall semester, the cubicles in the library’s first floor were removed to allow more natural lighting.

“I see a lot more productivity happening, and I think it’s better for us to be able to see,” said Librarian Susie Chin.

The library is also going through other changes. The heating, ventilating, and air conditioning (HVAC) system is being replaced by a better one. Dean of Library and Learning Supportive Services Eric Hanson spoke about how the temperature control system would provide a better environment for students at the library.

“Currently the library’s HVAC system is being reworked through this program with the facilities. When the project is complete, students will find a more comfortable library because the temperature will be more steady throughout the library at all times,” said Hanson.

The estimated savings of Phase I, which includes upper campus renovations, were at $165,165. However, the total actual savings surpassed that number by an additional estimate of $74,572 over the course of two years to reach a savings of $239,737 per year.

This earned GCC a Board of Governors honorable mention for energy and sustainability in September 2014. In addition to state-wide recognitions that set Glendale College as a leader in energy sustainability among the community colleges.

“We have been singled out as a college that used the money most successfully because we are an example of leverage. There’s virtually no college [in California] that utilized the leverage that we did,” said Director of Facilities Nelson Oliveira.

After the end of Phase I, Newcomb Anderson McCormick (NAM), an energy engineering and consulting company that served as a third-party reviewer, verified the improvements and their impact on GCC; which gave the green light to the start of Phase II. 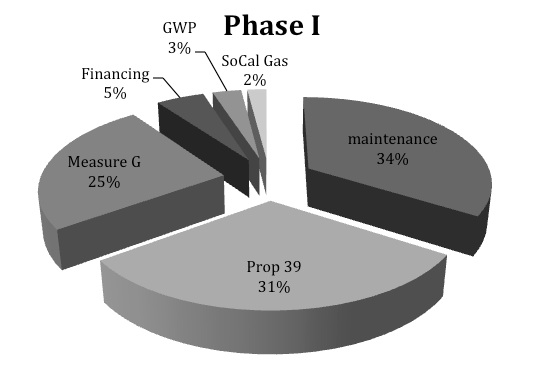 Now that Glendale College is ready to start Phase II, an estimated savings of $84,118 is anticipated. The changes will be concentrated on the lower campus and will primarily include lighting and temperature control.

The funding for the second phase will also be provided by scheduled maintenance, Prop 39, and rebates. Measure G bonds will not be used until the initiation of Phase III.

“It’s like investing $1, and then getting $3 back,” said Oliveira referring to funding.