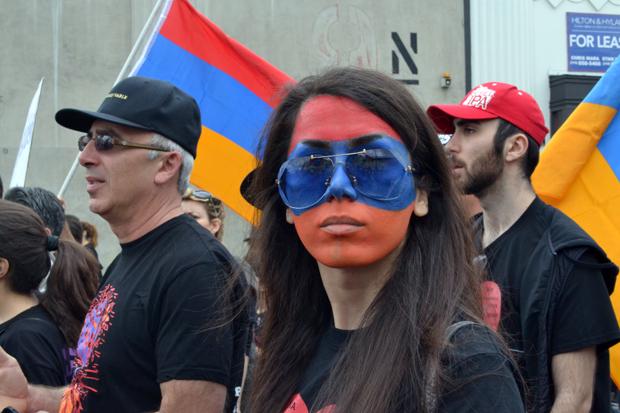 The month long commemoration of the centennial of the Armenian Genocide culminated with a procession to the memorial plaque on campus Thursday.

Last year, the Board of Trustees passed a resolution declaring April a “Month of Commemoration of the 100th Anniversary of the Armenian Genocide of 1915.”

Thursday’s ceremony, attended by board trustees and Glendale city council members, began with an instrumental performance from Albert Vardanyan, who played the duduk, a flute indigenous to Armenia.

“The resolution of our governing board of the Glendale Community College district urged our students, faculty, and staff in bringing in the community to engage together in significant learning,” Viar said. “To commit all of us to being ever vigilant and outspoken in doing all we can to never forget, and to never let such evil be perpetrated on our fellow human kind.”

The event continued with a video message from Congressman Adam Schiff and a personal story from a member of the board, Armine Hacopian, who described her father’s first-hand account of the 1915 events.

Her father lived in Van, which now belongs to Turkey, with his mother and brother. One day, his mother ordered the two boys to hide at opposite ends of the stream connected to their house. Her father eventually left his hiding place and went back to their home.

“‘I wanted my mother’s cooking. I walked there, but I didn’t dare walk in because something bad had happened…’” she said in his words. “And he just sat at the door thinking that his brother had been killed.”

What he didn’t know, however, was that his brother was alive. He had survived the genocide and stayed in Armenia. After about 50 or 60 years of believing he was dead, her father finally had a chance to reunite in Armenia, but he chose not to.

“He had emotionally left that area of his thoughts because it was too painful to remember,” she said.

Board of Trustees President Vahe Peroomian followed with a speech discussing the continued denial of the genocide by the Republic of Turkey.

“Recognition of the genocide by the government of Turkey would finally end the genocide,” he said. “It is time for the human race to finally grow up, and it is time for mankind to collectively say, ‘enough is enough.’”

Natalie Samarjian, a guest speaker for the Armenian National Committee of America project “America, We Thank You,”   discussed the U.S. efforts to aid the victims and survivors of the genocide.

“During the period of 1915- 1930, an unfortunately unpublicized part of U.S. history, three U.S. presidents,  Wilson, Harding and Coolidge, appealed to the American people to come to the aid of the Armenian people and asked them to make generous contributions,” she said. “This aid totaled $117 million, equivalent to $2.8 billion in today’s dollars.”

To close the ceremony, history and political science professor Levon Marashlian directed the people in the packed auditorium to walk from the auditorium to the plaque located in Plaza Vaquero, which was moved from its previous location to make it more visible. Audience members followed Vardanyan out as he played the duduk. They were handed red carnations to place them by the plaque and the traditional Armenian incense burning next to it.

“After 100 years, the will and determination to continue the struggle for recognition is still strong, and that will is strong within Armenians and non-Armenians alike,” Marashlian said.