State Funding Pulls Community Colleges Out Of The Abyss 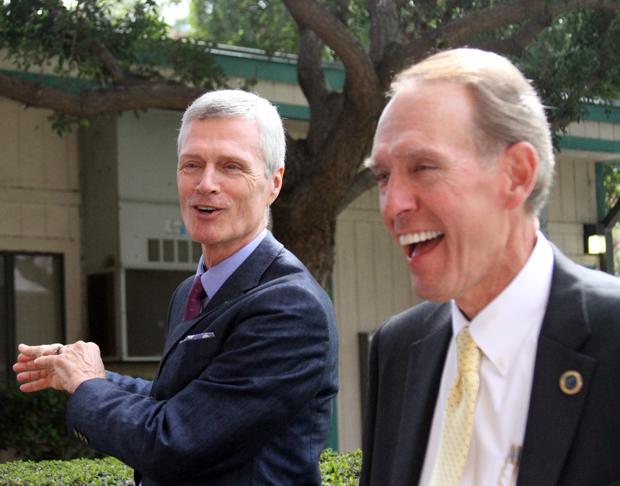 The crippling wound that the community college system suffered during last decade’s economic collapse is finally healing, according to statistics presented by California’s Community Colleges Chancellor Brice Harris at Glendale College on March 9.

During his lecture in the school’s auditorium, which was followed by a campus tour, Harris shared information, updates and future projections regarding public colleges for students, faculty and the Board of Governors.

“I think the budgets are going to improve and that means that the colleges are going to be able to add more classes back to support more students,” Harris said. “We expect to see students succeeding in greater and greater numbers.”

Vice President of Instructional Services Mary Mirch said that the recovery is evident through Glendale College’s instructional equipment funding, which is the money that is applied for upgrading student-related equipment, such as classroom projectors and computers.

Although this increase in funding suggests an optimistic future, Mirch said that the reality is far more complex. With years of limited state funding, campus maintenance and classroom upgrades were put on hold, but they are now a priority.

“It sounds that we are flushed with money,” Mirch said. “We are not. When the money starts coming back, then you have to prioritize how it is going to be used.”

Although student success is one of the main focuses for both the school and the system at large, President David Viar expressed plans to serve the campus’ physical needs.

“Over the next five to 10 years, we will be trying to address a number of issues related to upkeep, maintenance, deferred maintenance brought up to speed, as well as remodeling and renovations of different facilities,” Viar said.

Despite this increase in funding, America’s youth are still facing challenges. Harris said that more than 65 percent of the jobs available in 2020 are projected to require more than a post-secondary education. In 1970, only 26 percent of jobs demanded more than a high school diploma, he said.

Harris also said that for the first time, upcoming generations risk being less educated than their parents.

Measuring the percent of the global population that obtains a higher education, the oldest demographic of the American workforce, people between the ages of 55-64, are ranked third. However, the younger demographic, ages 25 to 34, is currently ranked 14th.

“Thus, we are falling further and further behind and unless we reverse that trend, our young people could be less educated than their parents,” Harris said later in an email interview.

Harris said that the reasons for this decrease can be explained by issues such as increasing poverty, challenges in kindergarten to high school systems and changes in student work ethic.

To combat this, the California community college system’s main focus is to develop the access to education, improve student success, attempt to close performance gaps and prepare a local workforce for high value jobs.

With Governor Jerry Brown’s substantial funding and mutual understandings across the state, the outlook is promising.

“We finally have the same goals across the state,” Harris said.

Regardless of what the statistics show, Glendale College Ethnic Studies professor Fabiola Torres said she is yet to see any real changes and that the only way to do so is by changing the way education is taught.

“I do not think there will be any difference until we change the quality of how we teach,” Torres said. “He [Harris] was very explanatory, but he just gave us the numbers. I wish he would have had the ability to spark a fire in us.”

When the presentation was concluded, Viar led Harris on a demonstrative tour of campus, after which he praised the college.

“When visiting the college you can see the excitement of learning in the faces of students,” Harris said. “It is the result of a dedicated group of people who come to work each day with helping students succeed as their top priority.”