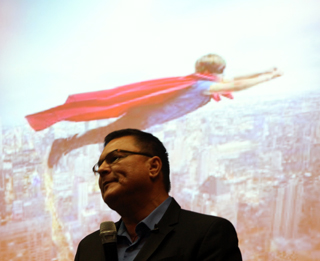 Creativity is the most important trait for a CEO today, but to achieve full creative potential one must first embrace a child’s mindset, said the self proclaimed creativity crusader Simon Silva during a presentation at Kreider Hall on Thursday.

Every night, the average person has between three to six dreams, in which nothing is shackled to the laws of reality and the mind’s creativity is free to roam.

“If that is not creative genius, I do not know what is,” Silva said.

This creativity is, however, repressed in a conscious state for many adults. To find a way to become more creative, people need to regress to a more creative self.

Glendale College ethnic studies professor Fabiola Torres initiated this lecture in order to spark a creative flame within students that are failing their courses.

“Here at Glendale [College] we have gotten data that shows that our students are failing. Especially it is the Latino and African American population that is failing,” Torres said. “As someone who used to fail, I felt that something that used to help me was inspirational speeches.”

To reignite her students, Torres contacted Silva, a celebrated artist who depicts Chicano struggles and hard labor, as well as an inspirational speaker on the subjects of creativity and critical thinking.

According to Silva, people are born with creative genius and individuality, but on the path to adulthood many children becomes self-conscious and afraid to stand out, which leaves these traits suppressed.

The reasons for this vary, but Silva said that parental and peer pressure, commercialization and a traditional education system all play a part.

“We have all been conditioned to think like everyone else,” Silva said. “We are more interested in knowing about the Kardashians than ourselves.”

This way, children will not devote themselves to a predestined notion and forfeit their creative opportunity to explore, which in many cases, will result in a mediocre pool of adult professionals.

In reality, however, many children grow up only seeing themselves become doctors or lawyers, when they could end up happier pursuing writing, painting or teaching.

There are many benefits that come from cultivating creativity.  For example, it develops problem-solving abilities, communication and self-esteem, which are all desired personal traits within the job market.

Still, to regress to a more creative mindset can prove difficult, but can be achieved through hard work, learning and higher education.

A traditional educational approach, which often treats students as a collective instead of individuals, will prove deficient for the cultivation of creativity.

According to Silva, a 21st century “organic” educational model, where individuality is encouraged, holds higher promise for such a goal.

Silva, who also went through the community college system, helped students legitimize their fears and insecurities about education, as well as help them realize that they are not alone, explained Torres.

This proved to be correct as students, as well as faculty, lined up to receive Silva’s autograph, take pictures with him and buy his book, “How To Cultivate a Creative Mind: A Guide to regain Creative Confidence.”

“[Silva’s presentation] gives us motivation in continuing with school and not letting anyone tell us what is good or bad for us,” Gonzalez said.