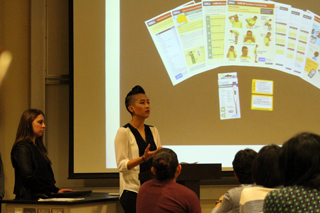 Influenza a Much Greater Threat to Glendale Students

With people cramming the doorways of the crowded Cimmarusti Science Center, Glendale College nursing students enlightened the audience on the subject of Ebola and Influenza on Feb. 24.

During the better part of 2014, the Ebola outbreak plaguing Western Africa was all over the media. When Liberian Thomas Eric Duncan fell ill on U.S. soil while visiting family in Dallas last September, public concern about this mysterious disease grew significantly.

However, the common influenza virus, which is often dismissed as an unpleasant annual occurrence, is still very prevalent and a more immediate threat to Americans.

The college’s nursing students led a lecture to better educate the campus about the viruses, how to take preventative measures and how to treat them if contracted.

“We wanted to pick something we did not know much about and that we think people should know about,” nursing student Abigail Rodriguez said.

The nursing students explained that there have only been four deaths caused by Ebola outside of Africa and that the chances of an outbreak in the United States are slim. However, Ebola has a mortality chance between 50-90 percent in those infected, so understanding and educating people about this disease is the best way to fight it.

Influenza is responsible for more deaths, yet the panic surrounding it is less severe. The flu claims around 50,000 lives annually in the United States, mostly within the infant and elderly populations, yet, the severity of the flu seems to be taken lightly and people happen to not get vaccinated.

“The biggest thing I tell people is to get yourselves educated,” nursing student Diane Kuraev said. “Hand hygiene is of outmost importance. People take that for granted.”

Although influenza vaccine is free with most insurance plans, and costs between $15 to $45 for people without insurance, only 42 percent of the population gets vaccinated a year. As a consequence, more than 40,000 doses of the vaccine were discarded in 2012, the students explained.

The influenza can cost an infected person, on average, $1,960 in hospital costs and lost work time, $45 for the vaccine can be seen as an investment.

Influenza is transmitted through the air, whereas Ebola spreads through contact with the bodily fluids of someone infected. This makes influenza outbreaks harder to contain.

While the viruses are similar to each other in the early stages, the flu targets respiratory organs and can lead to pneumonia. Ebola, however, is more severe with its high mortality and no vaccine currently available, can lead to hemorrhagic fever, which affects the blood vessels and causes bleeding.

“The flu you can survive most likely. Ebola is questionable if you would survive,” Rodriguez said. “But it depends on how quick you get help. If you have Ebola and you get care right away, and you are being treated with electrolytes and fluids, you have a good chance of living.”

However, if a person were diagnosed with Ebola, safety measures would be implemented nationwide.

The nursing students explained that there are 55 hospitals across the country that are equipped and have protocols in place to treat someone diagnosed with Ebola. Nine of those hospitals are located in California.

Despite the media frenzy, Rodriguez still believes the flu is a greater threat in the United States, whereas Ebola is more dangerous for West Africa.

Still, the college’s nursing students advocated caution before anything else.

“Each one of us can a difference,” Kuraev said. “If you feel like you are coming down with something, it is important to get medical treatment early, even if you doubt that it is Ebola. It is still better because you could affect the people around you.”