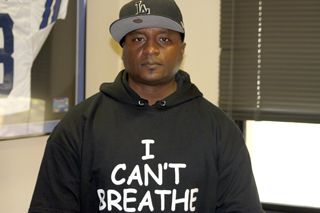 Eric Garner, 43, died at the hands of New York City police officer Daniel Pantaleo last July due to a chokehold, which NYPD prohibits. The medical examiner also cited obesity, asthma and heart disease as partial factors but ruled his death a homicide, according to Time Magazine. Garner, who had been arrested 30 times since 1980 and resisted arrest on that fateful day, made headline news because his last breath consisted of three words: “I can’t breathe.”

The officer involved was not indicted, which prompted President Obama to deliver a statement on the death of Garner, stating the “concern on the part of too many minority communities is that law enforcement is not working with them and dealing with them in a fair way.” The incident also sparked a silent protest against inequality and inspired people to promote proper justice.

Troy Davis, an academic counselor and adjunct professor of psychology at GCC, shared Garner’s story along with his own insight and experiences during a brief interview relating to Black History Month.  He held an informative talk at Camino Real 225 on February 26 regarding the purpose and influences of African American history and its impact to the world.

“Malcolm X, Martin Luther King, Dr. Kenneth Clark, Lewis Latimer, Mary Bethune, Harriet Tubman; The long list of African American figures that we must give our tribute and appreciation to goes on and on,” Davis said. “Many people lost their lives trying to fight for equal rights. We have to be able to appreciate the people who have lost their lives for, I would have to say, the minorities in general.”

In the world we live in today, freedom is not synonymous with equality. For generations, human dignity is something for which people have lived and died. However, there is a misconception that society today is undergoing post-racism, with people blinded to the fact that inequality is not just a thing of the past but continues to persist until today.

“In my honest opinion, I really do feel that people have more concern about dogs that are abused, in a literal sense, animal abuse, than they do about African Americans,” Davis said. “There’s a lot of healing that needs to take place, there’s a lot of work that needs to be done as a multicultural society. People deserve to have civil rights and civil dignity. Human dignity.”

Davis suggests communities promote racial harmony by learning about different cultures in order to get people talking about race comfortably and publicly.

“Anyone, despite race, can be an advocate as long as advocacy is genuine,” he said.

“Other groups have to want it, not just the African American community,” he said.

When it comes to openness and honesty towards the discussion of culture, Davis believes people must exercise emotional control and learn to be in a position where we can talk about cultural differences and community backgrounds at any time.

“The common ground is that we are all here in the United States. Your opinion matters to me regarding African Americans because I want to be your friend, and I don’t want you to be afraid of me, of my people, of our culture, because then, you’re not really living,” Davis said.