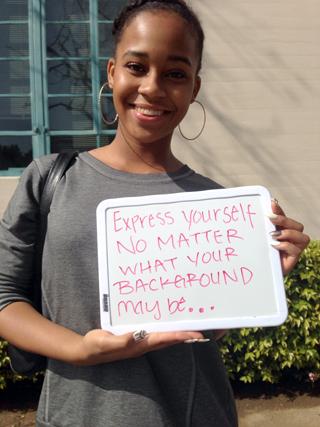 Inspired by last year’s renowned #itooamharvard initiative, GCC faculty and students created a social media event of their own to commemorate Black History Month on Feb. 19.

Although black history has been recognized since 1926, Black History Month has been celebrated annually throughout February since 1976 and serves as a nationwide reflection of African American history in the United States. New for this year, however, was the college’s way of applying it to the students’ everyday lives.

With the use of the social media outlet Tumblr, students walking the strip behind the administration building had a chance to immortalize their own personal views on Black History Month.

“It is basically an event to show what you as an individual person think about black history,” said Student Body President Francisco Aguilar. “Each person has a different perspective of it, and it is great that we can actually go in and say our own thoughts about it and also publicize what we feel.”

With help from student volunteers and other faculty, Kimberly Feig, an ethnic studies, sociology and social science professor, organized and executed this local rendition of #itooamharvard.

The #itooamharvard project was initiated by African American students at Harvard University last March. Pictures of over 60 students holding whiteboards with written accounts about being black at Harvard were uploaded to Tumblr.

Signed with the hashtag #itooamgcc, pictures of students holding travel-sized whiteboards, riddled with their own thoughts and reflections of Black History Month, were uploaded to Tumblr.

For example, written on Aguilar’s whiteboard was, “Recognizing how far we have come…”

By uploading these pictures to Tumblr, the students turned an event that was seemingly limited to the campus into a worldwide occurrence, accessible to anyone with an Internet connection.

“Tumblr enables a certain type of spontaneity in which you can facilitate those kinds of discussions on the spot,” Feig said. “If you ask someone to write a paper, you do not get that kind of spontaneity.”

With more than 30 contributions, Feig called the event a success, which she hopes to recreate next year, but preferably over a longer period of time rather than just one day.

“Doing it in one day and for one hour makes it very frantic, you are trying to get as many people involved,” Feig said. “But if it is over the course of a few days, you can really talk to people about why we are doing it and help them facilitate their own creativity.”

Glendale College student Brandee Mills, 17, said that social media is a good way to inform teenagers and aspiring college students about Black History Month, and help them, not only to commemorate history, but to write it themselves.

“I think it is about making a difference, especially being black and African American,” Mills said. “It is really inspiring to bring back the memories of the people who, once again, changed society because it would not have been the same if those people did not take a stand, step up and do what they had to do.”

Although events like this help people acknowledge and reflect upon African American history, having to designate a month every year to do so speaks to an unequal society. Feig argued that, to fight inequality, the conversations that Black History Month sparks should not be limited to the month of February, but be discussed and recognized all year.