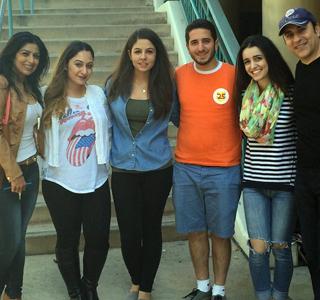 Despite winning various awards for his work, Vahik Pirhamzei did not call himself a filmmaker until the release of his second film “Guardian Angel,” which hit theaters on Friday.

Pirhamzei said his close friend and well-known Armenian artist, Vahe Berberian, hugged him after watching the film’s trailer and said: “Vahik, you are officially a filmmaker.”

Up until that moment, the Iranian-Armenian director, producer, writer and actor, pursued his career path by auditioning and freelancing for various roles and eventually creating his own productions. After leaving his hometown of Tehran and moving to Los Angeles in 1989, Pirhamzei remained optimistic on his journey to fame.

Pirhamzei established himself in the industry and has been asked to work on other projects. He also directs music videos for Middle Eastern and Armenian artists while encouraging others in the industry to follow through with their own dreams.

A former executive member of the Armenian Student Association at Glendale College approached the current president and vice president, Liza Hakopyan and Teni Bazikyan respectively, with the idea of having Pirhamzei attend an ASA meeting to speak to  students.

Pirhamzei previously attended an ASA meeting at the college to discuss his film “My Uncle Rafael” in 2012.

“We decided that it was a good idea because we have had him come as a guest speaker before and it was very successful,” said Hakopyan.

During the meeting, Pirhamzei said that he believes in passing along knowledge and in the value of passion but warned students that if they really want to accomplish something, they have to work hard.

“Love what you do and you’ll be successful,” he said.

Bazikyan called Pirhamzei a great success story. She said that although there are successful Armenians in different industries, there are only a few in filmmaking.

“Pirhamzei’s message is universal because he doesn’t just talk about film, but [also] about the importance of working hard,” said club adviser and political science professor Levon Marashlian.

“It is crucial for students to understand that,” Marashlian said.

Compared to his first film, a comedy developed around a character from his play “Mez Lavootchoon Chi Egell” (“Nothing Good Has Come Our Way”), “Guardian Angel” was suspenseful and a more difficult film to work on, but he felt more immersed in it.

“Comedy is in my blood and drama is in my heart,” he said.

“Guardian Angel” required a longer period of pre-production and countless hours of post-production, especially as the main producer, but Pirhamzei said it was all worth it.

Before starting on a project, however, Pirhamzei needs to be able to picture the end result in order for it to have the best possible outcome. Time, energy, effort and money are key aspects in his creative process.

Pirhamzei says he has an abundance of energy and effort, but runs low on the other two once in a while because it is a battle between one or the other.

Pirhamzei encourages everyone involved to keep going and tells them “it is going to happen, we need to make it work.”