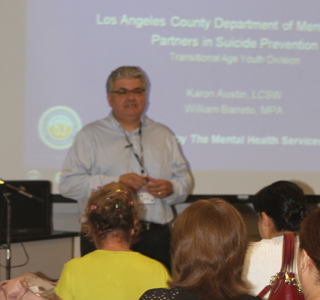 Although depression is a common illness among Americans, most are not well equipped to handle its symptoms and aftermath, particularly when it results in suicide attempts.

Last Thursday, William Barreto and Karen Austin of the Los Angeles County of Mental Health Partners in Suicide Prevention held a conference in CS177, where they informed the audience about suicide — the 10th leading cause of death in the United States. California, however, has the lowest rate of suicide attempts.

Barreto and Austin discussed many different issues pertaining to suicide, including: paying attention to warning signs such as clinical depression, which involves chronic sadness, loss of interest in most activities, trouble sleeping, and drastic changes in eating habits.

More warning signs of  “death wish” behavior are: constantly talking and thinking about death and partaking in high-risk behaviors with an increased chance of death, such as driving fast or running red lights.   A person contemplating suicide may also casually make comments like “It would be better if I wasn’t here” or “I want out,” and they might visit or call people to say goodbye.

According to Barreto, women commit suicide more frequently than men.

Nationally, the highest rate of suicide ranges from 45 to 55 years of age, while teens have the lowest rate. The highest suicide rates occur in the month of April.

Ninety percent of individuals who attempt to take their own lives also suffer from mental illness, including but not limited to depression, bipolar disorder, and schizophrenia. Alcohol is also associated with impulsive suicide attempts. Other common reasons include physical illness, disability and bullying.

Barreto recalls his uncle developing a hoarding disorder after his aunt passed away and making statements like “I won’t be here too long.” Barreto assumed his uncle was moving to Arizona at the time, but soon realized that his uncle was thinking about committing suicide. When confronted, his uncle admitted to his plans.

Barreto advised the audience to pay attention to warning signs observed in their loved ones and to talk to them in a soft voice to get them through their ordeals.

Also discussed were risk factors such as family history of mental disorders or substance abuse and suicide.  Physical and sexual abuse can also lead to suicide.

Austin explained the concept of “question, persuade and refer,” which is a guideline of questions to ask someone who is possibly thinking of killing themself. She said the first step was to ask the individual about suicidal thoughts with questions such as “Have you been unhappy lately?” or “Do you ever wish you could go to sleep and never wake up?”

Austin said the second step is to try to persuade the person not to commit suicide, and if that does not work, then get professional help. During emergencies, one can call the suicide hotline at 1-800-SUICIDE or dial 2-1-1 for assistance. Another recommended resource is the National Prevention Lifeline at 1-800-273-TALK.

Students suffering from depression or suicidal thoughts can seek help at the college’s Health Center. Crescent Orpelli, a mental health counselor and clinical supervisor, provide counseling to students and faculty.

Orpelli said that the best way to help suicidal teens is to talk to them and make them express how they feel. Making comments such as “I’ve noticed that you’ve mentioned feeling hopeless a lot lately” and bringing up other warnings sign will also help them open up and most will not deny that something is bothering them.