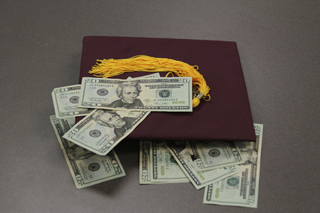 While slumped on a couch, surfing through hundreds of TV channels, many naive viewers are reeled into the illusion of success that schools like the University of Phoenix promise their students.

For-profit schools, such as Everest College or the University of Phoenix, are multibillion-dollar, private businesses that run on profit; however, like public schools, they receive financial aid that is federally insured. In fact, these institutions make 86 percent of their funding from federally backed money.

These institutions are now facing a federal lawsuit for fraudulent practices. Although this is more than called for, the government should have begun looking into their practices far sooner, considering the fact that billions of dollars were spent on these schools – money that was supposed to prepare students for vocational careers but instead left them in debt and unprepared.

According to a New York Times report, these institutions aggressively recruit students, calling them at all hours of the day, and even promising success to individuals with criminal backgrounds who could not legally hold the jobs that they were training for. Many would take out loans and apply for financial aid in order to attend, but the success rates and job placement opportunities they were promised were fraudulent.

Lavender had no idea what a for-profit college was. However, in just 10 minutes, an ACC recruiter was able to convince Lavender to apply for a program that cost $15,000 a year but did not require any math or English proficiency tests. Her recruiter told her she could easily find a job because pharmacy technicians were in demand.

Although Lavender found a position as a pharmacy technician in North Hollywood, she was laid off one month later because the pharmacy said she was undertrained. The pharmacy told her she did not have enough knowledge of medical terms and did not perform up to expectations.

“When I first started going to ACC, I was convinced that I would get a stable job in a pharmacy, but I never did,” said Lavender.

Flash forward three years later and she is currently looking for a position as a retail manager and aiming to return to school part time for fashion merchandising.

Although for-profit colleges and universities offer students accelerated programs that allow them to attain degrees and certificates at faster rates, they also take a greater financial toll. According to the National Center of Education Statistics, for-profit school costs range between $20,000 to $65,000, while public universities cost around $16,500. Despite their higher prices, for-profit schools do not even offer students services, such as housing, tutoring, or health centers.

Moreover, the federal government is filing a lawsuit against major for-profit schools for fraudulent practices. As a result of the government’s investigations, corporations like Corinthian Colleges Inc., the parent company of Everest College, has closed 12 campuses and is selling the rest of its United States facilities.

Students from low-income backgrounds are typically the main targets of these schools because they receive the most financial aid. Many educators find it disturbing to know that higher institutions of learning backed by the federal government prey on students who are already struggling financially and only trying to get an education to improve their situations.

In 2010, the Government Accountability Office released information about an investigation in regards to for-profit schools’ student recruiting practices. The 15 schools under investigation made questionable statements to the GAO and at least four of them encouraged undercover agents to falsify their financial aid forms. Although the report included the states these schools were in, it did not release their names; however, once the report was released to the public, many accreditation commissions imposed formal disciplinary actions on the schools involved.

Westech College is one school that has had a shaky history with accreditation since the GAO’s investigation. The Accreditation Commission of Career Schools and Colleges placed the college’s Moreno Valley campus on probation after the commission discovered six violations, including a questionable refund policy.

Interim director of the financial aid office at Westech, Cesar Perez, refused to answer any questions regarding the college’s probation for this story.