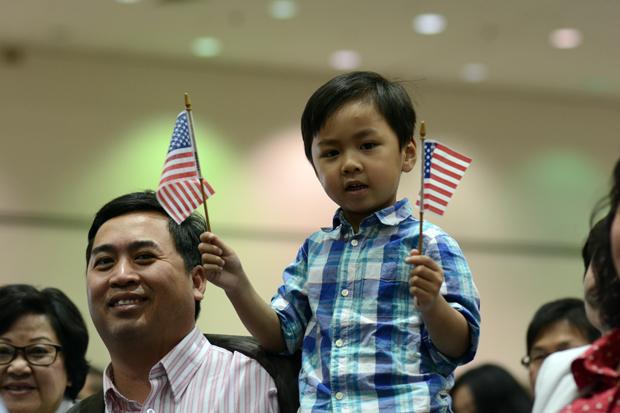 Eric Flores and Carlos Rodriguez waited for their mother, Mirna Rodriguez, outside the massive convention center doors as the American flag sailed above the skyline of downtown Los Angeles.

Mirna Rodriguez’ 20 year wait was finally over. She and thousands of others gathered for the United States Citizenship and Immigration Services naturalization ceremony on April 9.

“She was one of the last ones in her whole family to become a citizen,” said Flores. “She wanted to prove to everyone she could do it.”

More than 6,000 attendees received their certificates to become citizens of the United States during the ceremonies at 9 a.m. and 1:30 p.m inside the West Hall.

After the conclusion of the ceremony, within minutes of earning their legal right to vote, naturalized citizens are urged to register to vote and join the Democratic Party. There were no representatives or check-in tables to register voters under the Republican Party.

Among the dozens of countries represented at the ceremony, one in particular topped the list – Mexico. Isaac Mendez is a farm worker from Oaxaca, Mexico.

“I’ve been in this country for 15 years and it’s a great privilege to be an American,” Mendez said.

Pastors at a church in Los Angeles, Ly Trieu and her husband Tu Truong from Vietnam, sat two rows from the front of the stage. They came here for religious freedom.

“We don’t have freedom to worship in our country,” Trieu said.

Truong cradled his son waving an American flag, Daniel An Truong, among the thousands in the crowd.

For most of these new citizens, it’s an opportunity to apply for jobs and become part of the working class. Prior to their induction as citizens, most made a living by under-the-table jobs.

Maria Soto, 48, was born in Mexico. While pregnant, she traveled to the United States where she began to babysit for money to support herself and her unborn child. Soto said she wanted her son to have an education, so she sent him to a private school; Bishop Alemany.

She is now a representative of Farmers insurance. Her son, Ceaser Fernando Soto, 22, works at Wells Fargo and launched his own clothing line, Loia Apparel.

Tabish Kitan a father of one came to the country six years ago. Born in Pakistan, Kitan emigrated from Dubai to America. Kitan said the first thing he wants to do is apply for government jobs.

As the new citizens walked out the convention center, their loved ones waited for them waving American flags.

This ceremony changed the lives of diverse people from different cultures and continents. A Nigerian woman, Motunrayo Junaid, 28, was ecstatic that she was finally a United States Citizen.

“I’m so excited that I can finally apply for a passport so I can travel the world,” she said.

Junaid graduated from California Career College in the beginning of this year. Junaid was a middle school teacher back in Nigeria.

“I came to America because in Nigeria we did not have a good leader and there was hardly any chance to move up in the country,” Junaid said.

Junaid has been in the country for five years. She just took the National Council Licensure Examination and she is awaiting results, hoping to become a registered nurse in America.

Fabienne Jones, an international student from Switzerland and past contributing photographer to El Vaquero, moved to the country in 2006. Jones collected her certificate in Nevada earlier this month. Unlike the larger ceremonies in California, Jones was naturalized with a group of about 80 people from 34 different countries.

“I can finally vote and my voice can be heard,” Jones said.

Unlike some others, Jones’ process was not a difficult one. After a background check from the FBI and three years of marriage to a citizen and husband William Jones, she was able to take the naturalization test as the final chapter of her story story to becoming a legal resident of the United States.

“It felt great to finally become a U.S. citizen,” she said.

The United States Citizenship and Immigration Services holds these services, big and small, throughout the year and all across the country.

“For me, it is important to be immersed in the country I chose to live in,” said Jones. “I feel like I belong now.”