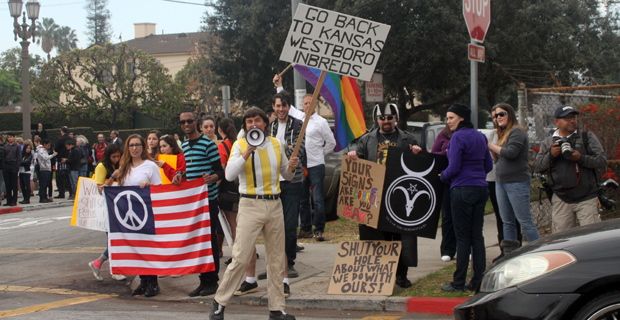 Hundreds of local residents turn out Sunday to counter a protest by members of the infamous Westboro Baptist church.

The Westboro Baptist church brought its convoluted message to four Glendale churches Sunday morning. Known for protesting gay marriage, abortion and, for some reason, military funerals, Westboro brought eight members of their church to the Jewel City with placards and loud music.

Hundreds of people from the community came out to protest the protesters. Calling it a “wall of protection,” locals lined the streets to counter the zealous views of the Kansas-based church group.

The event was peaceful with little interaction between the two sides and hardly a raised voice outside of a few chants from gay rights supporters. The group spent 20 minutes at each of the four churches between Colorado Boulevard and Lomita Avenue, standing on a neutral corner waving their signs before disbursing quietly.

The locals waved a few signs and flags as some gathered in front of the First Baptist church on Louise Street and sang hymns led by their pastor.

One must wonder what the point was, besides the obvious cry for media attention.