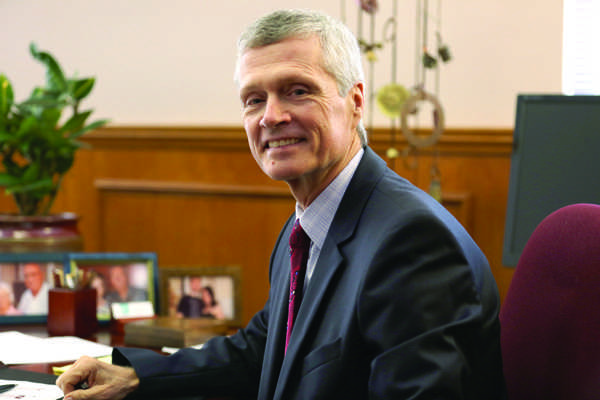 With the new semester in progress, Glendale Community College is becoming acquainted with its first potentially long-term superintendent/president since 2011. David Viar, formerly president of American River College in Sacramento, was selected for the position and took office in July.

As president, Viar hopes to rebuild an institution that has undergone 10 years of financially stressful times.

His career in education goes back a long away. Both of his parents, his aunts and uncles and grandfather were teachers.

“Education was really part of what I saw in my family and knew how important it is and what a special profession it is,” he said.

Though Viar initially preferred venturing out of the educational field, he always wanted to take courses that would benefit him were he to change his mind.

While attending law school, he knew that if he ever chose not to practice, he could teach at a university or use his law background in different ways.

Though he said he was very happy in Sacramento, he chose to move to GCC in order to be closer to his son, Justin, and his family, as Viar and his wife were already frequently traveling to and from Glendale.

According to Justin, both he and his wife are excited to have his parents move near them. A fan of Glendale, he has lived in the city for about six years and knew his parents liked the area. Describing his dad as a leader, a great mediator, and a visionary who is very grounded in realism, he says his dad is skilled in bringing people together and uniting them for a common goal, something he believes he can do for GCC.

“He’s got a keen eye for improvement,” Justin Viar said. “Every place he’s been, he’s left it a better place.”

Viar said his biggest challenge will be to take an organization that has been through “basically ten  10 years of difficult economic conditions” and assist in rebuilding its service to students, faculty, and staff.

“We have reached a plateau, I hope, in terms of how much money we have been losing and will now begin to see small amounts of money coming in, which will help us start to relook at where we are, what we should be doing, and how we can do better than what we’ve been doing,” he said.

During the summer, Viar began visiting with campus and community leaders in order to get their perspective on the college, what they felt its biggest challenges are, and pick their brains on how they could make more effective and efficient improvements. He also walked around campus “considerably” in order to see where the different buildings and rooms were while getting a sense of what the campus’ biggest challenges are with facilities.

He said that due to the number of years the school has had to deal with the economic turmoil, the facilities and instructional equipment have not been maintained or upgraded on the level that they should have been. With new revenue coming in, he said there needs to be a “major commitment within the college community to set aside money from our budget and to maintain the facilities we have.”

Because the school will be receiving from $500,000 to $600,000 from the California Clean Energy Job Act (Proposition 39), Viar and the governing board will look to see how they can use the money to ensure they make changes in energy and redirect money that can be saved from energy and utility costs to upgrading facilities.

According to Viar, the process of increasing revenue requires building on the work that others on campus have done. Impressed with the “very good work” that has been done at GCC, he looks forward to working with faculty in order to “help build on that success.” Building relationships with alumni, retired employees, and community leaders and businesses is just part of the process, as he said it could lead to individuals donating funds to the campus.

Vice President of Administrative Services Ron Nakasone says they will also seek to increase revenue through enrollment and additional grants.  He believes Viar’s experience in Sacramento will be an advantage to GCC.

Despite the challenges he will face, Viar is excited to work with an “outstanding faculty that has adjusted to meet the needs of the students and jobs of the future,” which he says has led to GCC’s great reputation throughout the region and explains why many students from outside the immediate Glendale city limits choose to study here.