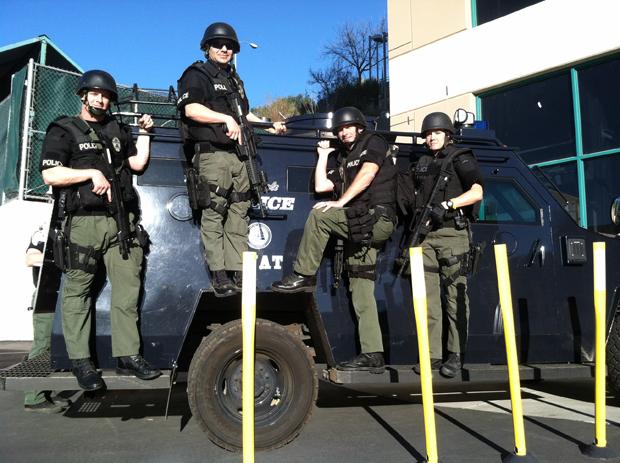 “They were able to go through multiple buildings to practice their training in a real life campus environment with actual classrooms, desks, the layout of how the room is,” said Gary Montecuollo, police chief of Glendale College. “I think [the training] was very valuable.”

In groups of four to five, the teams assessed the situations and proceeded after their target, whose simulated gunshots echoed throughout the hallways.

“The acoustics that [the halls] create is probably one of the hardest things to overcome. You have a loud shot, or something that goes off and you just can’t tell where it’s coming from,” said Sgt. Dan Suttles of the Glendale Police Department.

Armed with semiautomatic submachine guns and flashlights, their objective was to quickly track down and subdue the active shooter using proper SWAT tactics.

In some instances the assailant would no longer be simulating gunfire, but hiding in an unknown location. The officers then had to adapt to a barricaded suspect situation which was increasingly difficult as the campus was in the midst of an unplanned major power outage.

For the teams to be successful, they work as a single unit, trusting each other at every obstacle. Officers have asked that the specifics be kept confidential due to the sensitivity of the issue. However, even the simple task of opening a door is treated as a science, with predetermined strategies and formations.

On campus SWAT tactics have changed drastically over the last decade, following the tragedies of Columbine and Virginia Tech.

“The natural tendency for police officers was to surround the school, lock it down and then start negotiating, and that’s what the problem was … They started to realize that there are people out there who are willing to come on to a campus and kill young adults or children and typically then kill themselves,” said Suttles.

Today’s techniques are designed for the first few officers on scene to immediately respond to the problem and try to save as many lives as possible.

“God forbid, if it happens tomorrow, all the guys from the college police department are ready to go,” said GCC professor and police Sgt. Samir Abou-Rass.

While Montecuollo does not want to spark paranoia, he believes that the school should take a realistic approach that a campus emergency is possible. Montecuollo advises anyone who witnesses suspicious activity on or pertaining to the campus to report it to the police.

Montecuollo spent 14 years of his career as a Glendale SWAT team member and was part of the reestablishment of the team in 1997 after decades of remission. He also helped write the policies and procedures of the new team.

“Chief Ron De Pompa gets the credit, he was the captain at the time … and his vision to help this thing get started was really influential,” said Montecuollo.

GCC offers an emergency notification text system anyone can sign up for by visiting the emergency alert system page of the college website and entering their cellphone number.

Campus was closed during all SWAT training activities, and notifications were posted throughout the campus that there was police training in progress.