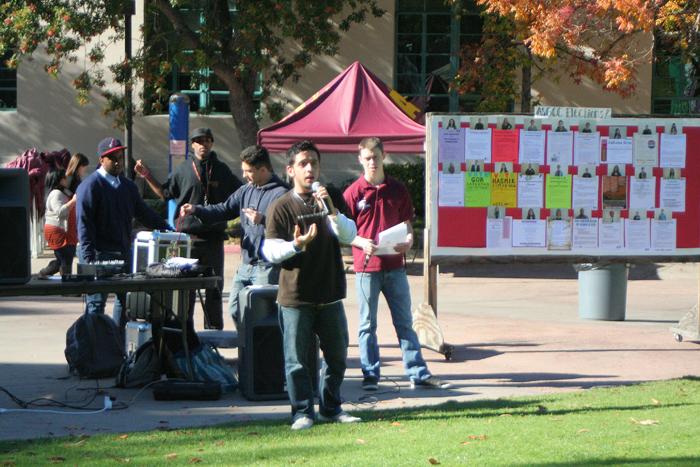 The Associated Students of Glendale Community College election for Spring 2012 will be held on Nov. 29 and 30. With 25 candidates running for the student government, students can vote for their representatives.

Tzoler Oukayan, adviser to ASGCC, said she participated in student government and the lessons that she learned carried into her career and other involvements.

“I think you have to make your college experience worthwhile,” she said. “This is the time to do things that you never thought that you could do.”

Before a student can become a candidate, he or she must be an associated student, meaning the student paid for registration fees. The student must register in at least nine units and have a cumulative 2.0 GPA. Additionally, he or she will enroll in or have completed Student Development 171, a leadership development course.

The candidate will also need to fill out a nomination petition and have 100 students sign it. Next, the candidate needs to attend a mandatory orientation and submit a statement.

An election committee, which consists of Oukayan and three student representatives, oversees the election to ensure that the process and the voting is successful and fair.

Suzanna Sargsyan, ASGCC president and student trustee, said it is important to have the students go out and cast their vote. Through classroom presentations, campaigning, instructors’ announcements and a forum, students will get a chance to learn more about the candidates.

“We want the students to know we are here for them,” Sargsyan said. “They need to know the faces of the people that represent them. When we do elections, it is important to take the time to listen to the people, not only to vote but to actually know what the results are.”

She was originally planning to transfer this year, but it did not work out. Because she has another year and has completed most of her classes, she decided to join ASGCC. She has also joined 11 clubs, some of which she is on cabinet, and is a student ambassador.

“I wanted to be as active and give back as much I could to the school before I leave,” she said.

Oukayan said that depending on some positions and the event, students spend an average of four to six hours per week working in the government.

Rashon Washington, vice president of campus relations, has been a part of ASGCC for one semester. He said he was a part of the honor society Alpha Gamma Sigma but was not very active before getting involved with student government. Now he says he loves it and wishes that it would never end.

“I’ve definitely exceeded that. I’m here at 6:30 every morning and I don’t usually leave until 9 or 10 a.m.,” Washington said. “During that time, I am working on the ASGCC newsletter, trying to come up with new events with my committee, making phone calls, and sending e-mails. There’s just so much that goes on.”

He said the members want students to know that they care about students. Their goal is to try to implement any request that students have.

“We definitely put in a lot of time,” Washington said. “We are very committed even though this is voluntary. I think it shows people that we are willing to do this out of the goodness of our hearts rather than for a paycheck.”

Juliana Kim, vice president of campus organizations, has participated in ASGCC for three semesters. She had always wanted to be in student government in high school and decided to try something different after moving from Brazil.

“When I graduated and came to GCC, I thought, ‘It’s a new beginning, so why not just try to come for interviews?’”

The semester after high school, she was appointed as a representative, which allowed her to gain new experiences. She later ran for and became senator and vice president.

“I got to know a lot of things that I wouldn’t have known,” Kim said. “The experience that I got I wouldn’t give up.”

She said there is no requirement for a student to be a representative in order to be on the committee. However, it would be beneficial to someone who is running for vice president because he or she would know what to expect.

“You meet 25 new people when you join,” Kim said. “The power and the knowledge that you get, you are able to make a change. You know what is going on in your campus.”

Kim, who is running for the same position again, said her committee recently passed out feedback sheets to ask what students thought about the Inter Organizational Council meetings and how they can improve.

“If I do get elected again, I am going to consider how to improve the meetings and what they think,” Kim said. “I think it’s important to know not just what the insiders think about the meetings but what the campus [thinks]. I will answer according to their comments.”

Saleebyan has two goals that she would like to see happen. The first is to get people more involved in school by promoting ASGCC and student organizations.

“Students here have this mentality where we are going to come take our classes and leave campus,” she said. “But there are a lot of opportunities here. [There are] a lot of great staff members and teachers that you can really form relationships with.”

Because her committee is in charge of advocacy, they have been researching government bills that will affect education. Her second goal is to push a ballot initiative for next year to become a proposition. It would tax oil in California, which would raise money for colleges. A certain percentage from the tax would go toward education for colleges and K-12.

“There are a lot of changes that is taking place in the educational system right now, so I would love if people were more aware of what is going on,” said Saleebyan.

Those who have joined student government have made lasting friendships.

“ASGCC is an experience on its own. I feel that if students get involved, it will make their college life more precious,” said vice president of campus activities Andrea Megerdichian.

“We are all a family. These are the people I will keep in my life for the rest of my life.”